Azerbaijan: Armenia can use BTK railway only after it leaves occupied lands 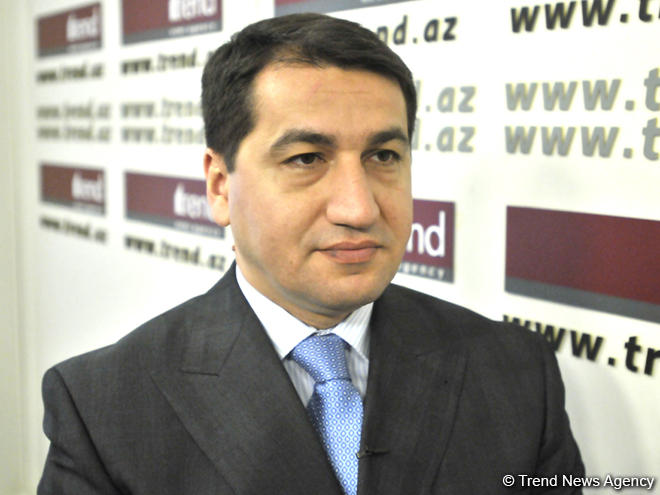 Azerbaijan has repeatedly stated that after Armenian troops withdraw from the occupied Azerbaijani territories, Armenia will be able to benefit from regional integration opportunities, Hikmat Hajiyev, spokesman for the Azerbaijani Foreign Ministry, told Trend.

Hajiyev was commenting on the recent discussions in the Armenian society over Armenia’s using the Baku-Tbilisi-Kars (BTK) railway, Trend reports.

“Sometimes it is very difficult to understand what Armenia wants. As a result of Armenia's aggression against Azerbaijan and its claims to Turkey, the Mehri-Julfa and Gyumri-Kars railway lines became inoperative and a landlocked Armenia found itself in a complete isolation,” he said.

“Azerbaijan has repeatedly stated that after Armenia takes its troops out of the occupied Azerbaijani territories, it will be able to benefit from regional integration opportunities, including such an opportunity of successful regional cooperation as the BTK railway,” Hajiyev said.

He added that Azerbaijan plays a stabilizing role in the region, promoting regional cooperation and prosperity thanks to such projects as Baku-Tbilisi-Ceyhan, TANAP, TAP, Baku-Tbilisi-Kars, North-South, and South-West.

He said the constructed BTK railway promises great prospects from the point of view of regional cooperation, transit opportunities, turnover growth and, as a result, creation of additional opportunities for the economies of Azerbaijan, Georgia and Turkey.

The BTK railway has been constructed on the basis a Georgian-Azerbaijani-Turkish intergovernmental agreement. The railway’s peak capacity will be 17 million tons of cargo per year. At an initial stage, this figure will be one million passengers and 6.5 million tons of cargo.

An official opening ceremony of the Baku-Tbilisi-Kars railway will be held in Baku Oct. 30.