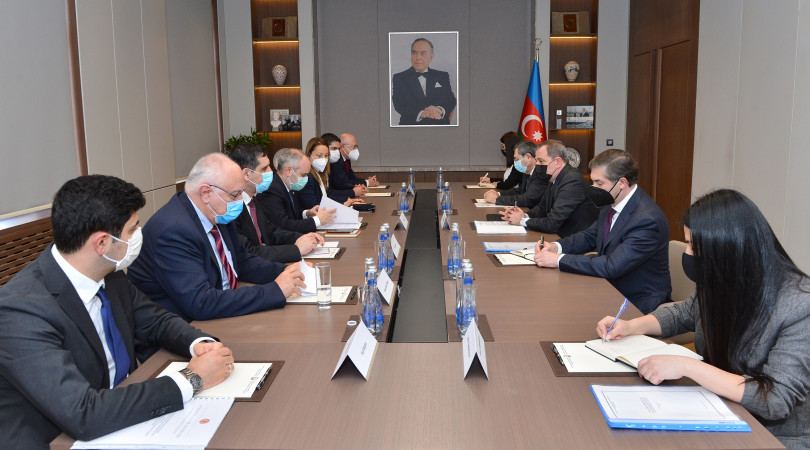 On March 10, 2021, the Minister of Foreign Affairs of the Republic of Azerbaijan Jeyhun Bayramov received a delegation led by the Chairman of the Foreign Relations Commission of the Grand National Assembly of Turkey Akif Çağatay Kılıç.

During the meeting, Jeyhun Bayramov cordially greeted the Turkish delegation and expressed his satisfaction with the current intensive development of high-level cooperation and partnership between Azerbaijan and Turkey.

Stressing that Turkey has always supported Azerbaijan's just position, the Minister stated that during the 44-day Patriotic War this support was openly demonstrated at all levels, including the highest level, the Grand National Assembly, Defence and Foreign Affairs Ministries and all other state agencies and finally the brotherly Turkish people.

Minister Jeyhun Bayramov informed the other side about the current situation in the region, including the new post-conflict security situation, in the example of Turkish-Russian Joint Monitoring Center brotherly country’s presence as a part of this security format, the post-conflict recovery and reconstruction process, mine threat being one of the most serious threats the region faces, as well as Turkey's participation in the demining process and construction of our liberated territories.

Noting that the liberation of the territories of our country from the occupation of Armenia excited all the Turkish people, Chairman of the Foreign Relations Commission of the Grand National Assembly of Turkey Akif Çagatay Kılıç stated that the news of the victory was greeted with great joy and wished that may Allah rest the souls of all the martyrs who sacrificed their lives for the territorial integrity of Azerbaijan. Stating that Turkey has always and in all circumstances stood by Azerbaijan and have spared no political and moral support to Azerbaijan, A. Ç. Kılıç stressed that the Grand National Assembly also openly expressed its will during this period. Noting that the signed trilateral statements opened up new opportunities in the region, he expressed that while Azerbaijan is a supporter of peace and progress, it is clear who opposes these views.

Noting with satisfaction that they were received by the President of Azerbaijan and held meetings in the Milli Majlis (Parliament) during the visit, the other side hailed the successful realization of the visit.

The sides noted the importance of further developing the existing cooperation between the two countries in all areas.