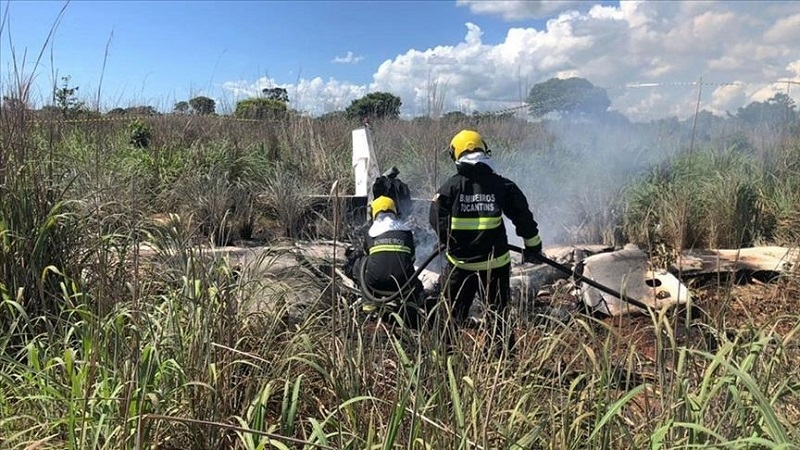 A football match that was scheduled to take place in Goiania on Monday between Palmas and Vila Nova, valid for Brazil’s Green Cup, was postponed after four Palmas’ players and the team's manager died in an air crash on Sunday, Anadolu Agency reports.

The pilot also died in the crash. The aircraft had just taken off and hit the ground in a thicket just after the runway head. The Brazilian Football Confederation (CBF) asked all Brazil Championship’s latest round games to hold a minute of silence in honor of the victims.

The four players had only recently joined the team. They were all hired in 2021. Two of them were only 23 years old and the oldest were 27 and 28. Palmas’ president was 32.

They were traveling in a private aircraft separate from the rest of the team because they had been diagnosed with COVID-19 last Thursday, the team said in a statement.

Created 24 years ago and mostly unknown in Brazil, Palmas was the first professional team in the capital of the state of Tocantins, northern Brazil. Only three years after its foundation, Palmas was for the first time Tocantins' champion. Today, it is the biggest winner in the state, with two bi-championships.

Chapecoense, which in November 2016 lost 19 of its own players in a similar tragedy in Colombia, used social media to mourn Sunday's accident victims.

Brazilian Air Force reported that members of the Aeronautical Accident Investigation and Prevention Service would investigate the accident.

According to the Fire Department, the aircraft was a twin-engine Baron, which could carry up to six people per flight. According to the records, it was not authorized to perform air taxi services.

The team press office said the plane had recently been acquired by its president, and that it was in the transfer phase. They also said the plane was not performing air taxi service.