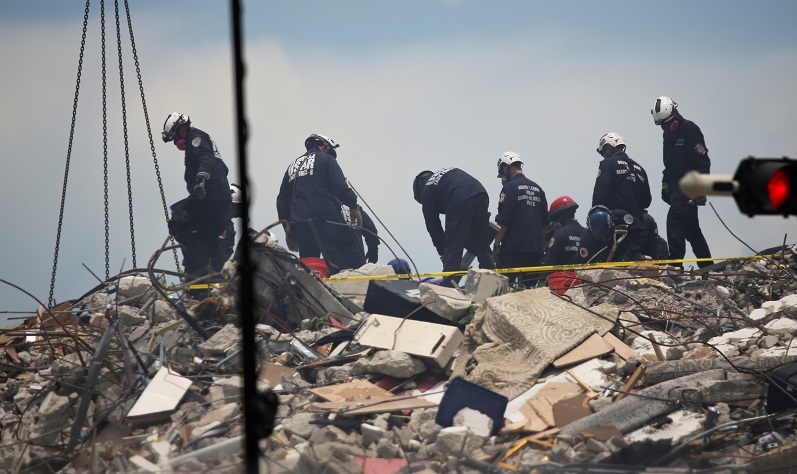 The death toll from last week's condominium collapse in Florida rose on Friday to 20 after search-and-rescue crews found two more bodies, including the 7-year-old daughter of a Miami firefighter.

The grim, painstaking search for victims in the rubble, which was suspended for most of Thursday over safety concerns, proceeded on Friday with greater caution and a watchful eye on a hurricane that could strike Florida within days.

There are 128 people still missing and feared buried beneath tons of pulverized concrete, twisted metal and splintered lumber as the search stretched into its ninth day.

The young girl was the third child to be recovered from the collapse site.

Miami-Dade County Mayor Daniella Levine Cava said the discovery was especially difficult for rescuers, who have mounted an unprecedented around-the-clock effort to search for survivors even as hopes have grown increasingly dim.

No one has been pulled alive from the debris since the initial hours after the 12-floor Champlain Towers South condo partially caved early on June 24 as residents slept.

Authorities had halted the rescue and recovery effort early Thursday for fear that a section of the high-rise tower still standing might topple onto search crews in the debris field.

But the operation was restarted about 15 hours later when it was deemed safe, though with a new set of precautions in place, Miami-Dade County Fire and Rescue Chief Alan Cominsky told reporters Thursday evening.

Under the new search plan, teams would confine their work for now to just three of nine grids demarcated in the ruins of the 12-floor Champlain Towers South condo, Cominsky said.

Authorities were eager to make as much progress as possible before the expected arrival of Elsa, which strengthened into the first hurricane of the 2021 season on Friday as it threatened the Caribbean.