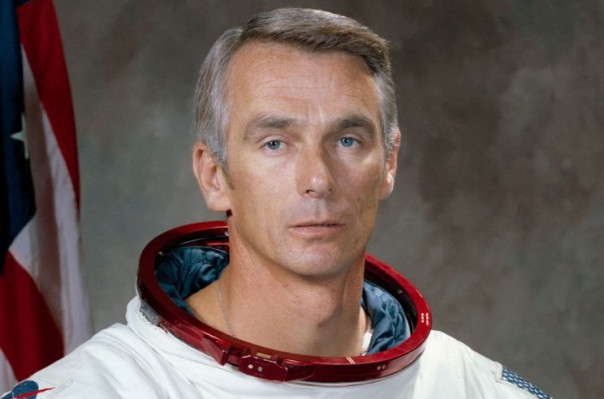 Former astronaut was final person to leave footprints on lunar surface as commander of Apollo 17 in 1972.

The last man to walk on the moon, Eugene Cernan, has died at the age of 82, The Guardian reports. The American travelled into space three times, and became the 11th person to walk on the moon and the last to leave his footprints on its surface as commander of Apollo 17, the final manned lunar landing.

His death was confirmed by Nasa in a statement on Twitter that read: “We are saddened by the loss of retired Nasa astronaut Gene Cernan, the last man to walk on the moon.”

The last flight to take humans to the moon touched down on 11 December 1972, and Cernan was the final astronaut to re-enter the lunar module, Challenger, before it took off three days later.

Accompanying him on the voyage were Ronald Evans and Harrison Schmitt. Cernan and Schmitt conducted activities on the lunar surface and made the moon their home for more than three days, while Evans remained in orbit aboard the command module, America, completing assigned tasks and controlling the cameras.

The Apollo 17 crew is known for taking one of the most iconic photographs in space-programme history, the full view of the Earth known as The Blue Marble. In 2007, Cernan said that despite its fame, the image had not “really been appreciated”.

He said: “What is the real meaning of seeing this picture? I’ve always said, I’ve said for a long time, I still believe it, it’s going to be – well, it’s almost 50 now, but 50 or 100 years in the history of mankind before we look back and really understand the meaning of Apollo … really understand what humankind had done when we left, when we truly left this planet, we’re able to call another body in this universe our home. We did it way too early considering what we’re doing now in space.”

He added: “It’s almost as if JFK reached out into the 21st century where we are today, grabbed hold of a decade of time, slipped it neatly into the 1960s and 70s [and] called it Apollo.”

Cernan logged 566 hours and 15 minutes in space, of which more than 73 hours were spent on the surface of the moon. Born in Chicago on 14 March 1934, Cernan – better known as Gene – received his commission through the naval reserve officer training programme at Purdue University.

He began flight training upon graduation and was assigned to attack squadrons 26 and 112 at the Miramar naval air station, California, and subsequently attended the Naval Postgraduate School.

Cernan was one of 14 people selected in the third intake of Nasa astronauts in October 1963 to participate in the Gemini and Apollo programmes. He became the second American, and third person, to walk in space during his first spaceflight, as pilot of Gemini 9A in June 1966. On his second space flight in May 1969 he was lunar module pilot of Apollo 10.

Cernan was also a backup crew member for the Gemini 12, Apollo 7 and Apollo 14 space missions. Nasa said the former astronaut held “the distinction of being the last human to leave his footprints on the lunar surface”.