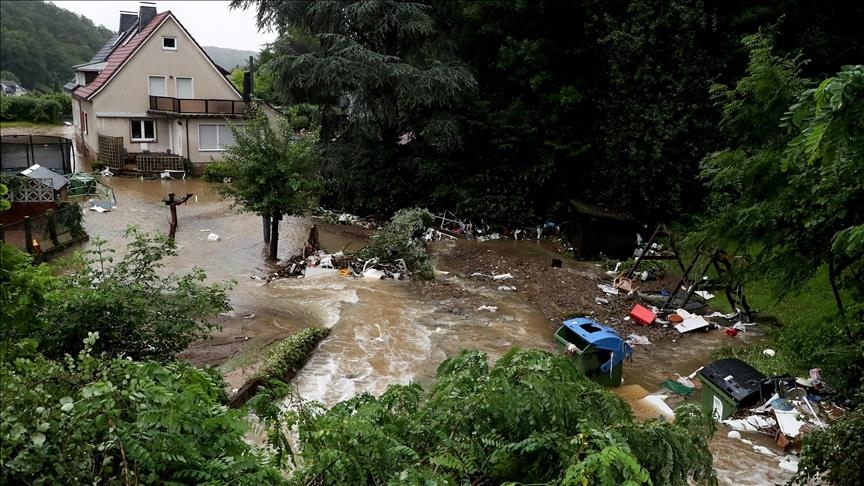 The death toll from Germany's worst floods in living memory rose to 165 on Monday as emergency services continued to comb through decimated towns in search of dozens of people still missing, AFP reported.

A deluge of rain fell over western Germany over two days last week, sending torrents of water rushing down streets, sweeping away trees, cars and sheds, and destroying swathes of housing.

Many victims have been found dead in sodden cellars after attempting to retrieve valuables, while others were swept away by the sheer force of the water.

Emergency workers have been out in force to assess damaged buildings, clear debris and restore gas, electricity and telephone services.

In some areas, police have deployed speedboats and divers to retrieve bodies.

A total of 117 people are now confirmed to have died in Rhineland-Palatinate state, a police spokesman told AFP, with 47 victims in neighbouring North Rhine-Westphalia and one in Bavaria.

German Interior Minister Horst Seehofer and Armin Laschet, the head of North Rhine-Westphalia state and the frontrunner to succeed Angela Merkel as chancellor, were on Monday due to visit the Euskirchen, one of the worst-affected towns.

On Sunday, Merkel visited the town of Schuld, calling the devastation "shocking" and calling for the world to speed up efforts to tackle the climate crisis.

The disaster has catapulted climate change to the top of the agenda in Germany, ahead of September 26 polls that will mark the end of Merkel's 16 years in power.

Experts say that because a warmer atmosphere holds more water, climate change increases the risk and intensity of flooding from extreme rainfall.

Heavy rainfall has also battered southern Germany, as well as Belgium, Switzerland, Luxembourg, the Netherlands and Austria in recent days.

At least 31 people have died in Belgium.

The high death toll has also brought scrutiny to Germany's weather alert system and whether people in the risk zones were notified early enough.