Gunay Afandiyeva: We propose to build a cultural center of the Turkic world in Karabakh 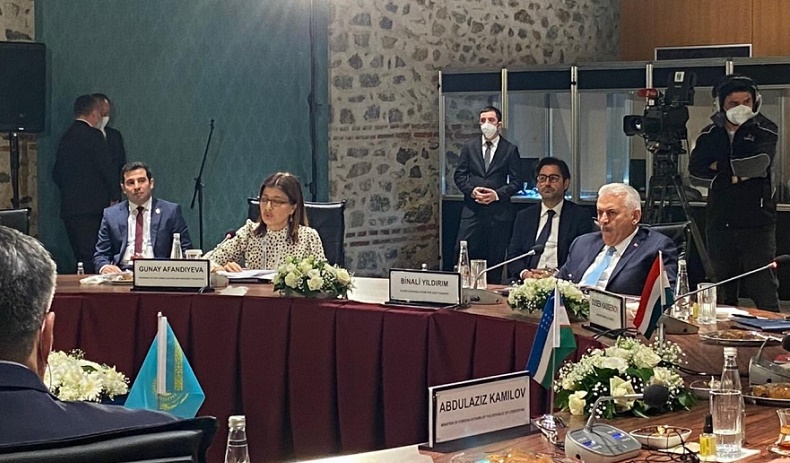 “We propose to build a cultural center of the Turkic world in the beautiful Shusha - native Karabakh, which is an integral part of the Turkic world,” said President of the International Turkic Culture and Heritage Foundation Gunay Afandiyeva in her speech at the 8th Summit of Foreign Ministers of the Cooperation Council of Turkic-Speaking States.

Gunay Afandiyeva said: “The Great Karabakh Victory won by Azerbaijan, in fact, was the Victory of the entire Turkic world, because it united the entire Turkic world. Turkey's open spiritual support for Azerbaijan has become an example of true brotherhood and friendship for the whole world. On the 30th anniversary of their independence, the Turkic-speaking states once again proved that they have common values - Turkic values. Not to forget these values, our rich heritage and to present them to the world is one of the priorities of the International Turkic Culture and Heritage Foundation. To this end, this year the Foundation organized conferences, exhibitions, events dedicated to the “Great Silk Road”, women and children, traditions and many other topics, implemented large-scale projects, published books in Germany, Poland, Italy and other countries reflecting the culture of the Turkic world, postage stamps were issued in Spain, performances were staged in Bulgaria.

The “Dede Korkut” Chamber Orchestra, created under the auspices of the Foundation, organized concert programs committed to the opening of the Year of Bela Bartok, as well as the 880th anniversary of Nizami Ganjavi.

The International Turkic Culture and Heritage Foundation is also expanding its international relations. Thus, this year a Memorandum of Cooperation was signed between the Foundation and Lithuania. The Memorandum provides for the preservation and promotion of the heritage of the small ethnic peoples of Turkic origin - Tatars and Karaites living in Lithuania. With the participation of the Minister of Foreign Affairs of Lithuania, the Foundation organized an exhibition and concert dedicated to Tatars and Karaites, as well as a scientific conference.

Finally, the Foundation's documents were approved this year. For this, I express my deep gratitude to the Presidents of the founding member States of the Foundation - Azerbaijan, Turkey, Kazakhstan and Kyrgyzstan. All this motivates us to new successes and victories.

This center will become a place of fusion of our history, culture, heritage, will become one of the symbols of our solidarity, a new proof of our eternal brotherhood.”