Over 15,000 people sign petition against Armenia over minefield maps 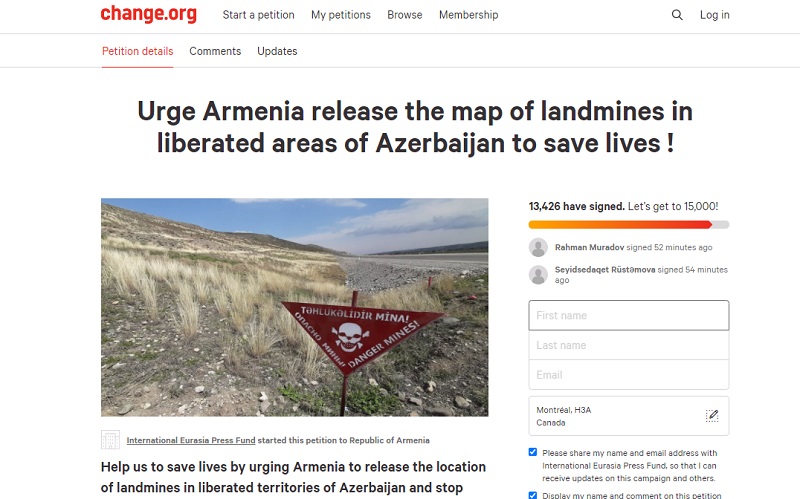 A group of civil society organisations operating in the war-affected regions of Azerbaijan has filed a petition against Armenia on the world-famous website www.change.org . Well-known public figures, cultural figures, civil society representatives and human rights activists have recently joined the campaign to publicize and share the petition.

"The petition has aroused great interest in the international arena. The petition received 172,017 views. 23,227 people have shared the petition so far. In total, more than 500 comments have been written, all of which supported the legitimate demand of Azerbaijan. To date, 15,000 people have joined the petition. The petition has been joined not only in Azerbaijan, but also in the United Kingdom, Switzerland, Russia, Pakistan, Canada, the United States, Hungary, Qatar, Saudi Arabia, the UAE, Malaysia, Germany, Turkey, Australia, Singapore, Burma and even South Africa and Kenya,” said Umud Mirzayev, President of the International Eurasia Press Fund, a key member of the UN Economic and Social Council (ECOSOC) with main Consultative status and one of the main initiators of the petition.

The petition calls for a protest against the nearly thirty-year occupation of Nagorno-Karabakh and surrounding regions of Azerbaijan, as well as the serious mining of those territories and the refusal of Armenia to provide maps of mined areas after Armenian troops withdrew in the post-conflict period.

"Armenia knows where the mines have been laid, but refuses to disseminate this information under various pretexts," the document says.

Thirty years later, Azerbaijani IDPs return and try to establish a new life for themselves in those mined areas. However, in the post-war period, more than 85 Azerbaijanis have been killed or seriously injured by landmines. ”

"The petition is a joint appeal of many people on www.change.org  to direct the world community, international organisations and media to the mine problem facing Azerbaijan. Thanks to our unity, this statistic, which is growing every minute, brings us closer to our goal, ” Umud Mirzayev emphasised.

"By signing this petition, our call on Armenia to submit maps of mined areas can prevent the loss of many innocent lives. I urge all our compatriots to join the petition and share it. We call on our compatriots living in brotherly country Turkey, post-Soviet space and Europe to be more active," the IEPF President Umud Mirzayev added.