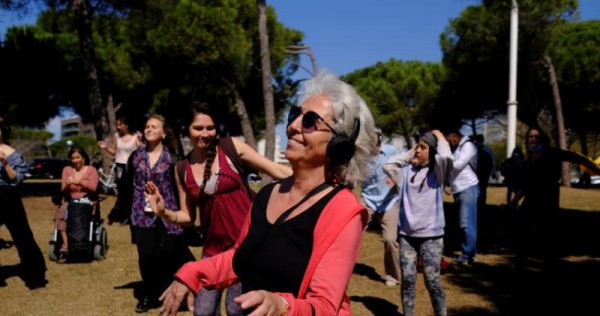 Barcelona ravers have found a way to get around COVID-19 curbs on clubs by holding outdoor silent discos in some of the city’s best-known locations.

On Sunday, people welcomed the first day of spring by putting on their headphones and busting some moves at Mar Bella beach along Barcelona’s famous seafront - all while respecting social distancing regulations.

“At first it seems a bit odd dancing in the middle of Barcelona and people were stopping to look, but it’s beautiful ... It’s a great thing to do on a Sunday morning, come here and connect a bit to the music,” he said.

What started off as a fun meet-up between friends has grown into a regular Sunday morning event, the Tribu Silent Disco. One took place at the famous Magic Fountain in the neighborhood of Montjuic.

“(We asked ourselves) what could we do to boost dancing now that there are so many restrictions? And we had the idea to do it outdoors and with headphones,” Silent Disco co-founder Xavi Panella told Reuters.

“First we told friends and acquaintances and then people joined because we do it outdoors and in beautiful places where we don’t bother anyone and we maintain a safe distance.”