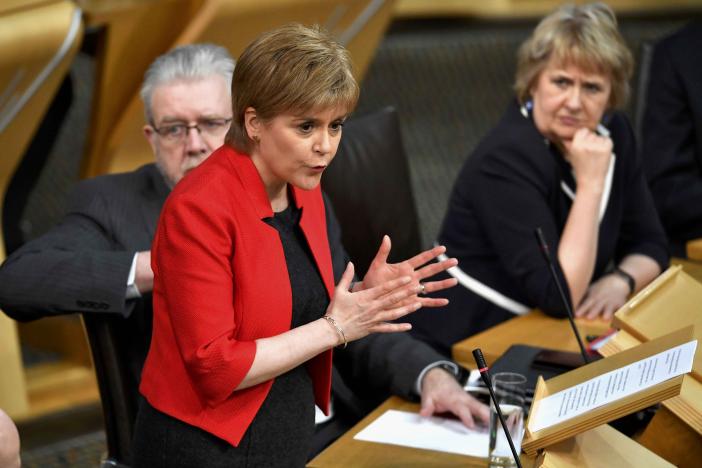 British Prime Minister Theresa May said last week that "now is not the time" for a new choice on Scotland's future.

Scotland's First Minister Nicola Sturgeon sought backing from the Edinburgh parliament on Tuesday for her proposal to hold a new referendum on independence from the United Kingdom, the first formal step in a process resisted by London, according to Reuters.

The parliament started a two-day debate on Sturgeon's proposal to hold a referendum in late 2018 or early 2019, with a vote expected on Wednesday. The current balance of power means Sturgeon is almost certain to win the chamber's backing to formally ask London for permission to press ahead.

"It will simply not be acceptable for the UK government to stand as a roadblock to the democratically expressed will of this parliament," said Sturgeon on the first day of debate.

Scotland voted against independence by 55 to 45 percent in 2014, but Sturgeon argues circumstances have changed since then because the UK as a whole voted in a referendum last year to leave the European Union while Scotland voted to stay.

British Prime Minister Theresa May said last week that "now is not the time" for a new choice on Scotland's future as complex divorce talks between the UK, the world's fifth-largest economy, and its 27 EU partners are about to get under way.

In a heated debate, Ruth Davidson, leader of the Scottish Conservatives, accused Sturgeon of acting like a "bulldozer", putting independence above all else despite not having public support for another vote.

Davidson's party, the main opposition to Sturgeon's Scottish National Party, has proposed an amendment opposing any independence referendum before April 2019.

Sturgeon said she had sought alternatives for Scotland since the Brexit vote in June last year but her overtures to the UK government in Westminster had been rejected.

"Nine months on there is no indication at all that this parliament's voice has carried any weight at (Britain's national parliament) Westminster," she said.

"Instead the UK government is taking decisions entirely unilaterally which I, and many others, believe will deeply damage our economy, our society and our standing in the world."

London's permission for a new referendum is needed because any legally binding vote on UK constitutional matters has to be authorized by the UK parliament.

If the UK parliament agrees, a so-called Section 30 order would temporarily hand over power to the Scottish assembly for this matter, mandating it to decide on how a new independence referendum could be organized.