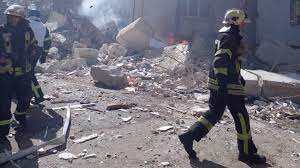 At least 10 civilians have been killed by Russian shelling in the city of Severodonetsk in eastern Ukraine today, the governor of Luhansk region, Serhiy Haidai, has said, News.az reports citing UNIAN.

Haidai said that heavy shelling had caused fires in residential areas in the region, damaging houses and hospitals and hitting a scientific production plant.

Russia has shifted most of the focus of its war to eastern Ukraine, after pulling back its forces from near the capital Kyiv.

The BBC has not been able to independently verify these claims.