The ghost town of Karabakh, Aghdam waits for its revival: French portal 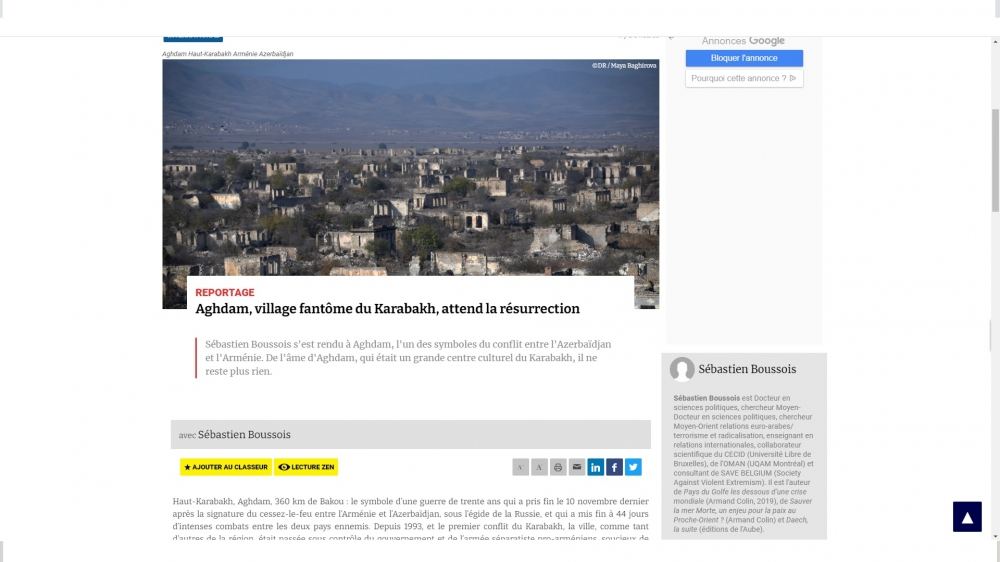 An article entitled "The Karabakh ghost town of Aghdam is waiting for its revival" has been published on the French news portal "Atlantico".

“During the First Armenia-Azerbaijan Nagorno-Karabakh War, many cities and villages of the district fell under the control of the Armenians who tried to fulfill the dream of "great Armenia",” the article said.

As a result of the war, 800,000 Azerbaijanis were expelled from their native lands and became refugees and internally displaced people. After the occupation by the Armenians, the pre-war life in Aghdam disappeared and it turned into a ghost town.

Aghdam resident Tarlan Iskandarova recalls the situation during the war.

Iskandarova said that her 26-year-old husband died during that period and she was forced to flee home being pregnant.

"All that was left after my husband is our daughter,” Aghdam resident said. “We were forced to leave, leaving everything behind."

Iskandarova said that the population feared the possible massacre that was perpetrated in Khojaly.

Aghdam resident spent the first years of resettlement in a tent, then the state provided her with an apartment.

Iskandarova said that while leaving Aghdam, she could not find the body of her husband and up till now he does not even have a grave.

The journalist talks about the destruction committed by the Armenians in Aghdam. He writes that the city was plundered and destroyed, that nothing remained of Aghdam, once considered one of the centers of the Nagorno-Karabakh region with its theaters, hotels, and various enterprises.

The world's only Bread Museum, the renowned Mugham Center has been razed to the ground. Only one mosque survived because the Armenians used it as a control point. The Armenians dismantled and took everything they could, even stones from the walls of houses.

The author of the article stressed that after the second Nagorno-Karabakh war, the Armenians, leaving these territories, burned down all the houses and mined everything around.

The author says that sappers are working in Aghdam, which was returned to Azerbaijan on November 20, 2020.

“There are only ruins,” the author said, adding that it takes time to return the population to their houses.

“The Azerbaijani government is going to restore the city in its previous form,” the article said.

In conclusion, the journalist writes that today all internally displaced people have only one dream - to return to their native lands.