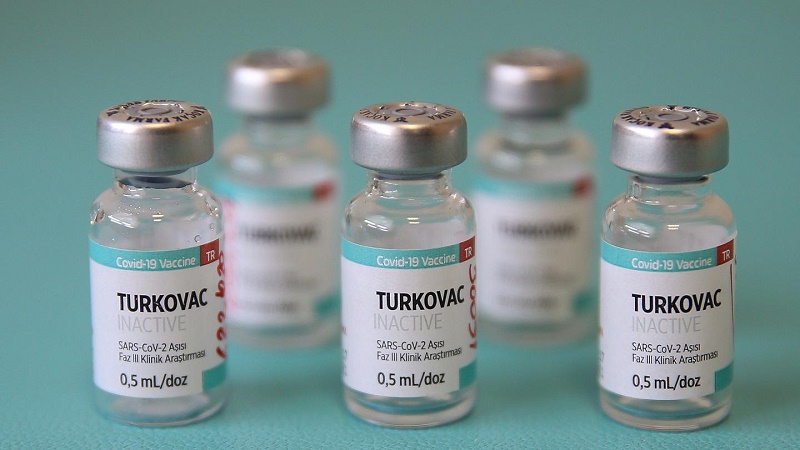 Turkey's domestic vaccine Turkovac reduces the risk of contracting COVID-19 by 49.29% when compared to the Chinese CoronaVac, according to a study conducted by the country's leading Hacettepe University, Anadolu Agency reports.

On Wednesday, Professor Serhat Unal, a member of the Health Ministry's Coronavirus Scientific Committee, and Professor Mine Durusu Tanriover, lead researcher of the phase-3 trials for Turkovac, held a joint news conference in the capital Ankara to announce the intermediate results of the trials.

Unal said the intermediate results include samples collected until Dec. 27, 2021.

He said the first volunteer received the jab on June 22, and since then the results have regularly been shared with the Health Ministry.

Tanriover said 1,182 healthy volunteers were selected between ages 18 and 55.

They had neither been infected with COVID-19 nor received a jab, she added.

She also shared the results of a study conducted on the prevention of symptomatic cases of COVID-19 on 1,008 volunteers. Of them, 68 people were diagnosed with COVID-19. Among the infected people, 45 had received CoronaVac, while 23 received Turkovac.

These figures demonstrate, she said, the risk of contracting the virus in the CoronaVac group was 8.96%, but 4.55% in the Turkovac group.

Therefore, she said, Turkovac was at least as safe as CoronaVac and reduced the risk of contracting the virus by 49.29%.

Tanriover stressed both vaccines were highly effective in preventing the onset of severe symptoms of the disease.

Only one volunteer given the CoronaVac jab experienced advanced-stage side effects, while those administered Turkovac did not have such complaints, she said.

The most common mild side effect was pain around the injection area, she said.