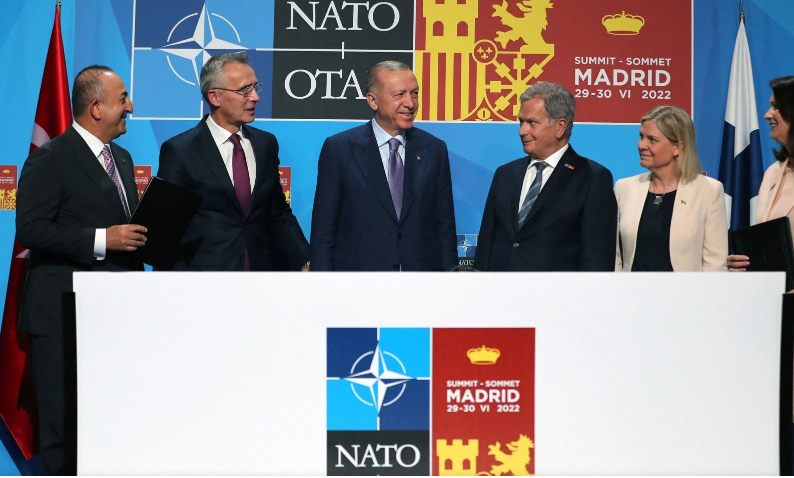 The first meeting of the Permanent Joint Mechanism, established within the framework of the Tripartite Memorandumsigned by Türkiye, Finland and Sweden at the NATO summit in Madrid recently, will be held in Finland on Aug. 26, according to the Presidency’s Directorate of Communications late Friday, News.az reports citing Daily Sabah.

The Turkish delegation of the Permanent Joint Mechanism will be chaired by Presidential Spokesperson Ibrahim Kalın and Deputy Minister of Foreign Affairs Ambassador Sedat Önal, while the representatives from the Justice Ministry, Foreign Ministry, Interior Ministry, National Defense Ministry and the National Intelligence Organization (MIT) are expected to take part.

Türkiye, Sweden and Finland signed the trilateral memorandum on June 28 on the Nordic countries’ NATO membership process after an important meeting in Madrid in which Ankara won concrete steps it was awaiting, especially in the field of terrorism.

The recently signed memorandum envisages Finland and Sweden, as future NATO allies, to show full solidarity and cooperation with Türkiye in the fight against terrorism in all its forms and manifestations, against all threats to its national security, especially the PKK terrorist group.

Furthermore, Sweden and Finland also agreed not to support the PKK terrorist organization's Syrian wing, the YPG, as well as the Gülenist Terror Group (FETÖ).

In the memorandum, the three countries stated that they would establish a structured joint dialogue and cooperation mechanism at all levels, including law enforcement and intelligence agencies, in order to develop cooperation on the basis of consensus in the fight against terrorism, organized crime and other common problems.

The countries also decided to establish a Permanent Joint Mechanism with the participation of experts from the Ministries of Foreign Affairs, Interior and Justice, Intelligence Services and Security Institutions to follow up and implement the steps recorded in the memorandum.

In addition, Finland and Sweden confirmed that there was no national arms embargo against Türkiye, and announced that they would act in solidarity and cooperation with the country on this issue.