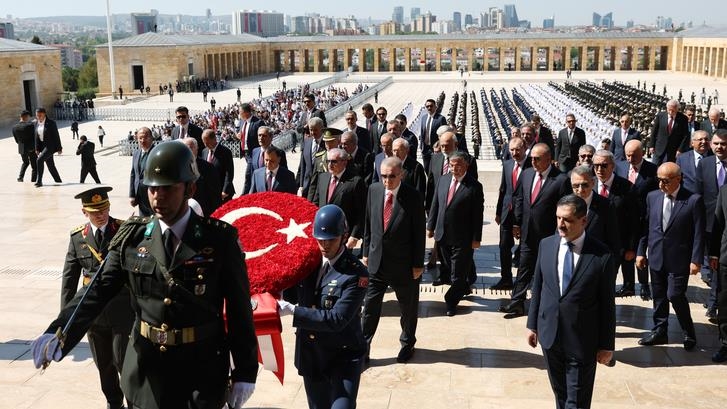 President Recep Tayyip Erdogan, senior government and high-ranking military officials, and opposition leaders laid a wreath at Anitkabir. A minute of silence was followed by the Turkish National Anthem.

“Dear Ataturk, on the 100th anniversary of the Great Victory, which is one of the most important turning points in our glorious history, we commemorate with mercy your comrades-in-arms, distinguished members of the Grand National Assembly, and our saintly martyrs,” Erdogan wrote on the memorial book at Anitkabir.

Erdogan vowed to continue to advance the Republic of Türkiye in line with the set goals and to strengthen it in every field, especially in economy, defense and diplomacy.

Türkiye, which has overcome the global pandemic with great enthusiasm, also successfully manages the conflicts in its region, and carries out diplomatic moves that are appreciated by the whole world for the restoration of peace and stability, he added.

Neither the plots of the "oppressors" nor the attacks of "bloody terrorist organizations" will be able to prevent the construction of a growing, stronger Türkiye, which is also the hope of the oppressed, he stressed.

Later, Erdogan visited the Turkish State Cemetery in the capital Ankara. “None of the internal and external evils will be able to prevent Türkiye from rising, strengthening and taking the place it deserves in the global system," he said.