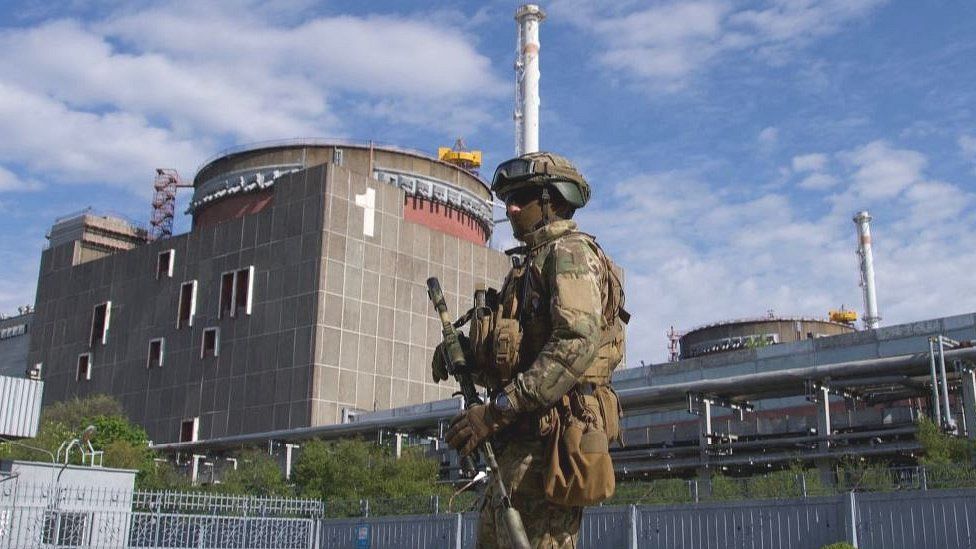 Russian troops are occupying the sprawling Zaporizhzhia plant by the Dnieper River in southern Ukraine.

It is Europe's biggest nuclear plant. The Ukrainian staff are still operating it, but Russia has sent its own nuclear experts to monitor their work.

Russia's deputy prime minister has vowed to sell power from it to Ukraine.

Marat Khusnullin said Russia would integrate the Zaporizhzhia plant with Russia's energy system if Kyiv refused to pay for the plant's electricity.

Visiting Russian-occupied southern Ukraine on Wednesday he said "if the Ukrainian energy system is ready to receive [electricity] and pay for it, then we'll work, but if not - then the plant will work for Russia".

However a spokesman for Ukraine's state nuclear agency Energoatom said it would take years to link the plant to Russia.

"The plant only works in Ukraine's energy grid," Leonid Oliynyk told the BBC.

"The Russians can build a power line theoretically, but it will take a long time, like their Crimean bridge - several years," he said, referring to the bridge connecting Crimea, which Russia annexed in 2014, to Russian territory.

"Now the power station is working at a minimum level, but Kyiv remains in charge, all the power lines are controlled by Ukraine. The Russian statement is wishful thinking," Mr Oliynyk added.

Normally the plant generates more than half of Ukraine's nuclear power and 20% of the country's total electricity supply. But now just two of its six reactors are operating.

Ukrainian forces still control the city of Zaporizhzhia, on the opposite bank of the Dnieper. The nuclear power plant is in Enerhodar, a town of nearly 53,000 built in Soviet times to house the nuclear workers.