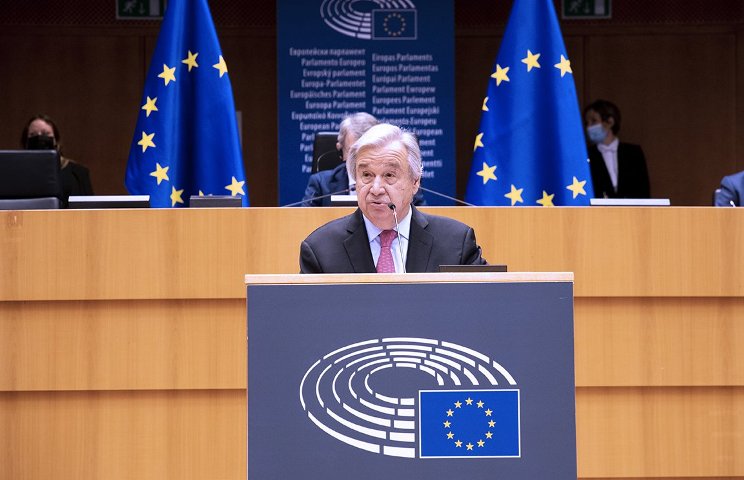 The European Union (EU) must use its leverage to ensure people everywhere have access to COVID-19 vaccines, UN Secretary-General António Guterres said on Thursday, according to the official website of the organization.

In a wide-ranging multilingual speech to the European Parliament in Brussels, the UN chief underscored the need to ramp up vaccinations globally.

“The pandemic is causing more deaths today than a year ago. And vaccines are our only way out of this crisis. They must be considered as a global public good, available and affordable to all,” he said.

“Vaccine equity is not only the greatest moral test of our times. It is also a matter of effectiveness”, he added.

The Secretary-General reiterated his recent call for an Emergency Task Force that would mobilize pharmaceutical companies and key industry players in implementing a plan to ensure the entire global population is vaccinated by “as early as possible in 2022.”

Members would include vaccine-producing countries, as well as nations that could manufacture these treatments provided they have assistance, supported by the World Health Organization (WHO); the vaccine alliance, GAVI, and international financial institutions.

“And the European Union must use its leverage as a global actor to help in this effort and ensure fair and equitable access to vaccines for all”, he said.

Fresh from being re-appointed as UN Secretary-General, Mr. Guterres told parliamentarians from the 27 member bloc, that he will use his second term to foster more effective global cooperation to address common concerns.

“The pandemic has revealed our shared fragility, our inter-connectedness, and the overwhelming need for collective action.  Our biggest challenge — and greatest opportunity — is to use this crisis as a chance to pivot to a greener, fairer and more sustainable world,” he said.

With the pandemic exposing shocking inequalities between developed and developing countries, he urged governments to consider imposing a “solidarity tax” or “wealth tax” on those who profited from the crisis, which would go towards funding socio-economic recovery.

“But beyond that, developing countries must have access to additional liquidity,” he said, speaking in French. “In this context, I renew my call to support the most vulnerable people and countries, including, if necessary, through debt relief.” Addressing the fragile state of the planet, Mr. Guterres thanked the EU for showing leadership in achieving net zero carbon emissions by 2050.

More and more countries are joining the drive for carbon neutrality, and he said their commitments must be bolstered by clear deadlines for ending fossil fuel subsidies and finance, and plans to halve emissions by 2030.

Ahead of the COP26 UN climate change conference this November in Scotland, the Secretary-General urged the EU to mobilize the $100 billion to support climate action in developing countries, as promised under the Paris Agreement on climate change.

“With many countries on the frontline of the climate crisis, we have a moral imperative and a clear economic case for supporting developing countries to adapt and build resilience to current and future climate impacts,” he said.