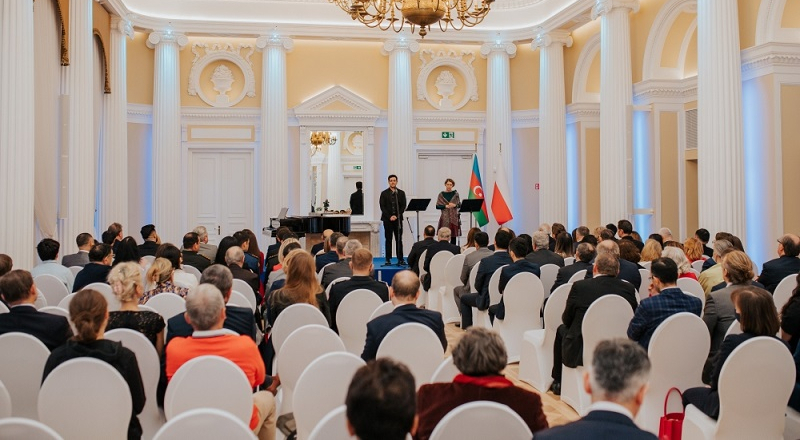 The event featured a presentation of a book of selected works by Nizami in Polish, as well as a postcard committed to the poet. At the ceremony, the guests were presented with an exhibition of paintings by a young Azerbaijani artist, the author of illustrations of the book - Maryam Asadova.

The event was attended by President of the International Turkic Culture and Heritage Foundation Gunay Afandiyeva, President of the Polish Academy of Sciences Jerzy Duszyński, Mufti of Polish Muslims of Poland Tomasz Miśkiewicz, President of the Association of Polish Writers Anna Nasiłowska, representatives of the Polish post, heads of higher educational institutions, academic society, statesmen and public figures, members of the diplomatic corps operating in the country, as well as Azerbaijanis living in Poland.

Opening the event, Ambassador of the Republic of Azerbaijan to the Republic of Poland Nargiz Gurbanova stressed that today marks the 880th anniversary of the great Azerbaijani poet and thinker Nizami Ganjavi. The ambassador expressed special gratitude to President of the International Turkic Culture and Heritage Foundation Gunay Afandiyeva, President of the Polish Academy of Sciences Jerzy Duszyński and the State Committee on Work with Diaspora of the Republic of Azerbaijan for support provided in the preparation of the event and the book dedicated to Nizami Ganjavi.

Speaking about the creativity of Nizami Ganjavi, Gurbanova noted that "Hamsa" of the poet, his immortal works, including gazelles, gasids and rubais have been translated into many foreign languages not only in the middle East, but also in foreign countries and still are very popular.

Nargiz Gurbanova emphasized that 2021 was declared by the order of President of the Republic of Azerbaijan Ilham Aliyev "The Year of Nizami Ganjavi" and assessed the organization of this literary and musical evening as an important contribution to the preservation of the great heritage of the poet.

Speaking at the ceremony, President of the International Turkic Culture and Heritage Foundation Gunay Afandiyeva expressed satisfaction with the holding of the event in the homeland of Frederic Chopin and Adam Mickiewicz - Poland, in one of the most beautiful cities in Europe - Warsaw.

The President of the Foundation noted that this year is significant because the entire Turkic world celebrates the Victory of restoring the territorial integrity of Azerbaijan and the return of its historical lands – Karabakh. Gunay Afandiyeva also stressed that this year the entire Turkic world celebrates the anniversaries of great personalities - Nizami, Yunus Emre, Alisher Navoi and many others.

"880 years is a very significant figure, but the legacy that Nizami left us goes beyond these 880 years. Nizami is always modern. The values that are the basis of his creativity are universal values,” said the President of the Foundation.

Speaking about one of the cultural centers of Azerbaijan, where Nizami lived and worked – the city of Ganja, called by the poet himself "The Land of Wizards", Gunay Afandiyeva noted that his creativity is a universal heritage not only of Ganja, but also of the entire Turkic world. The President of the Foundation stressed that despite the fact that the great poet spoke Pahlavi, Persian, Arabic and Greek, his spiritual and poetic language was Turkic. Afandiyeva appreciated the announcement of the "Year of Nizami" by President of the Republic of Azerbaijan Ilham Aliyev as a vivid expression of great respect not only for classical Azerbaijani, but also for general Turkic literature.

Providing information about the activities of the organization, Gunay Afandiyeva also noted that the Foundation, combining various cultures and civilizations, tries to create a powerful cultural layer between them.

Speaking at the event, President of the Polish Academy of Sciences Jerzy Duszyński spoke about the importance of the ceremony dedicated to the 880th anniversary of the great Azerbaijani poet Nizami Ganjavi. Noting that Nizami Ganjavi is loved not only in Azerbaijan and in the East, but also in the Western world.

Duszyński also stressed his influence on world literature and philosophical thought. Duszyński expressed gratitude to everyone who contributed to the organization of the event, and also conveyed his congratulations to the Azerbaijani people.

In the artistic part of the event, selected poems by Nizami Ganjavi were performed in Polish and Azerbaijani languages by the Polish researcher of Azerbaijani musical art Aneta Strzemsalski and a young student Ilham Guliyev.

Uzeyir Hajibeyov's romances "Without you", "Beloved" and other musical compositions to the verses of Nizami Ganjavi were performed.

At the end of the ceremony, the guests were presented samples of Azerbaijani national cuisine and sweets.

The event was widely covered by the Polish media.