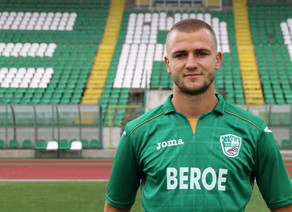 Report informs referring to “24 chasa” that the club demands 80,000 EUR for the 28-year-old striker.

Unnamed club from Kazakhstan is reported to be interested to sign Khristov. Azerbaijani clubs “Neftchi” and “Gabala” are also looking for striker. “Neftchi” hasn’t signed any of two players examined in Antalya. Transfer of Valery Bojinov from Serbian “Partizan” was suspended due to high cost.