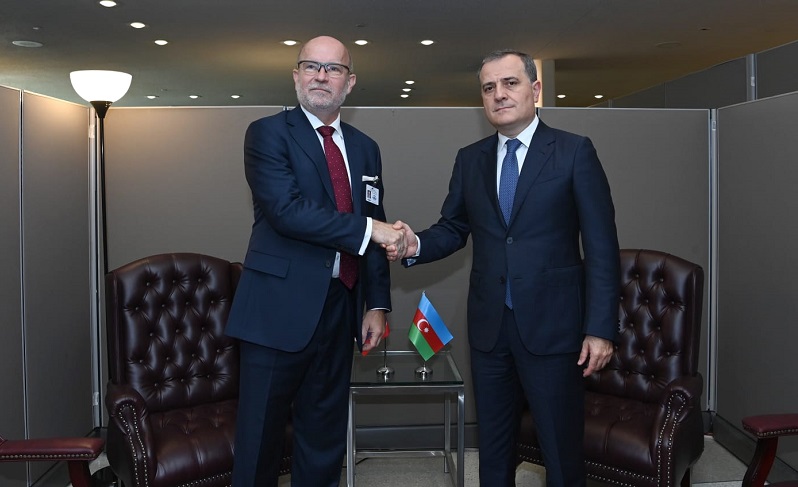 On September 21, within the framework of the high-level week of the 77th session of the UN General Assembly in New York, Azerbaijani Foreign Minister Jeyhun Bayramov met with his Slovak counterpart Rastislav Káčer, the Foreign Ministry told News.Az.

Minister Jeyhun Bayramov congratulated his colleague on his new appointment. He noted that the bilateral relations between our countries are developing in a number of directions and that there is great potential for the expansion of this cooperation. The importance of consistent work on our part for the purpose of development of bilateral cooperation in the economic field, as well as promotion of mutual investments was emphasized.

The minister gave detailed information to the opposite side about the new situation in the region after the 44-day Patriotic War, the measures taken by us in connection with the implementation of the trilateral statements, the behavior of the Armenian side inconsistent with the obligations assumed by the said statements and recent provocations, and the threat of landmines that directly threaten the lives of people in the liberated areas.

Minister Rastislav Káčer noted the importance of continuing the existing political dialogue between our countries. He emphasized the importance of respecting the principles of international law, which are the basis of interstate relations. He emphasized that he is determined to further develop the traditional friendly relations, cooperation, economic and trade relations between Slovakia and Azerbaijan. Taking into account Slovakia's extensive experience and technologies, he pointed out his intention to support efforts in the field of demining.

The ministers also discussed issues of cooperation within the framework of international organizations, as well as other areas of mutual interest.