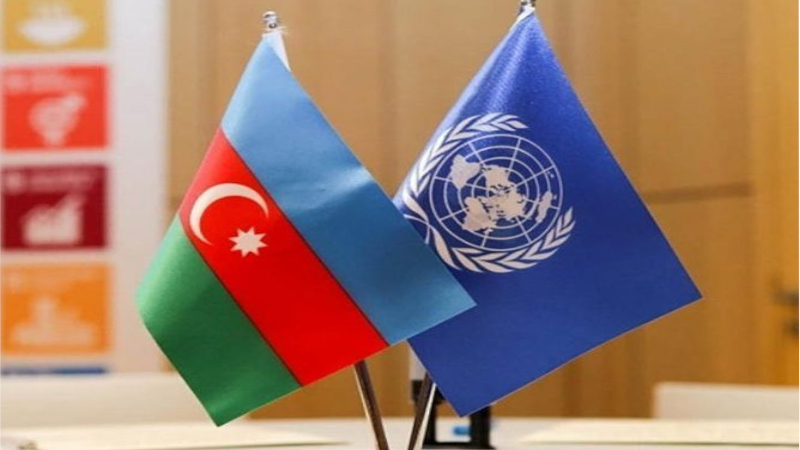 The letter sent by the Permanent Representative of Azerbaijan to the UN Secretary General in connection with Armenian Prime Minister Nikol Pashinyan’s visit to Nagorno-Karabakh has been circulated as a document of the UN General Assembly and Security Council, said Azerbaijani Foreign Ministry spokesperson Leyla Abdullayeva.

The letter reads: “On 9 May 2020, Prime Minister Nikol Pashinyan of Armenia visited the occupied Nagorno-Karabakh region of the Republic of Azerbaijan to celebrate two mutually exclusive occasions. namely, the seventy-fifth anniversary of the victory over fascism in the Second World War and the forcible capture by the Armenians in May 1992 of the city of Shusha - Azerbaijan's historical center and cultural cradle, with a predominantly Azerbaijani population before the war. As is known, as a result of the Armenian offensive in May 1992, the city of Shusha and 30 villages in the Shusha district were captured by the invading Armenian forces, 195 Azerbaijani civilians were killed, 165 were wounded and 58 persons went missing. The city of Shasha and the surrounding villages were ethnically cleansed of their Azerbaijani population: more than 24,000 residents of Shusha were forced to leave their native lands and properties. What should be particularly noted is that it happened while the political leadership of Armenia and Azerbaijan had negotiations in Tehran, as an outcome of which they signed the Joint Statement, committing to resolving the conflict by peaceful means and in accordance with international law. The devastating consequences of the barbarian methods of warfare employed in the course of the Armenian aggression against Azerbaijan in the 1990s resemble the fate of thousands of cities and towns that were located and destroyed during the Second World War. As a result of its occupation in May 1992, Shusha has suffered irreparable damage at the hands of the aggressor.

Many unique historical, cultural and religious sites in the city, such as Panuh Khan Castle, Gara Boyukkhanym Castle, Yukhary Govharagha, Ashaghy Govharagha, Saatly, Khoja Marjanly, Merdinli, Kocharli, Julfalar, Hajy Yusifli, Chol Gala, Tara Mahalla and Chukhur Mahalla mosques, caravanserais and mosque of Mashadi Shukur Mirsiyab and Mashadi Huseyn Mirsiyab, the madrasas of the Yukhary and Ashaghy Govharagha mosques, the House of Natavan, the Shusha Museum of History, the Shusha branch of the Azerbaijan State Museum of Carpets, the Karabakh Museum of History, the Karabakh Museum of Literature, the State Gallery of Pictures, the House Museum of Uzeyir Hajybayov, the House Museum of Bulbul, the House Museum of Mir Mohsun Navvab and the mausoleum of Molla Panah Vagif, have been destroyed or plundered, while systematic actions have been taken to erase any signs of the city's Azerbaijani cultural and historical identity.

Moreover, as a means of implementing its annexation policy, Armenia encourages and facilitates the transfer of settlers into the occupied territories depopulated of their Azerbaijani inhabitants, including the city of Shusha, in clear violation of international law and in contravention of the objectives of the political settlement of the conflict.

That the capture of Shusha and other districts, cities, and towns of Azerbaijan, which caused heavy human losses and suffering, is glorified in Armenia proves that aggression, racism, and deep-rooted hatred are at the cornerstone of that Member State's ideology and policy. Armenia's cynical attempts to draw parallels between the perfidious seizure of the Azerbaijani city and the great victory in the Second World War also represent a profound disrespect for the memory of millions of people throughout the world who sacrificed their lives for freedom from fascism.

However, there is nothing surprising in such a policy of Armenia, where, for example, Nazi Generals Garegin Nzhdeh and Drastamat Kanayan are raised now to the rank of national heroes

There is no doubt that Armenia will be compelled to withdraw its armed forces from all the occupied territories of Azerbaijan, including the city of Shunha, and that the demographic composition and the cultural structure of the liberated areas will be restored and the right of the forcibly displaced population to return to their homes in safety and dignity will be ensured.”