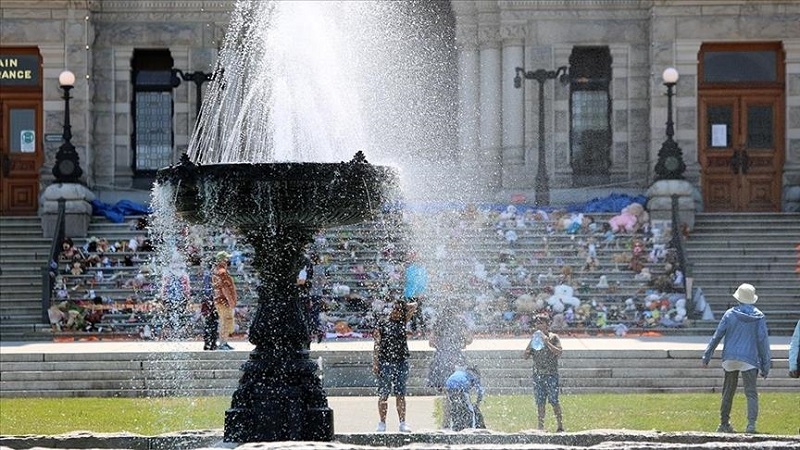 Canada's unprecedented heatwave this week saw a record temperature of 49.6C (121.2F), extending as far south as the Antarctic, the World Meteorological Organization (WMO) said Friday, warning that climate change “is the defining challenge of our time.”

“The most immediate and direct consequence was that the village of Lytton, which witnessed record temperatures for three consecutive days, was devastated by fire on Thursday, Canada's National Day,” said WMO spokeswoman Clare Nullis at a UN briefing in Geneva.

"We have seen heart-wrenching images of the village from the ground, and the smoke from the fires is visible from satellites in space."

That increased the possibility of landslides caused by glacier melting in mountains, damages, malfunctioning of infrastructure and transport systems unprepared for such high temperatures as well as many other social and economic risks.

Heatwave not just in North America

"The heatwave is not just in North America but is being witnessed in other parts of the world," said Nullis.

"Siberia, which last year saw extended and exceptional heat, is also being hit by heat and renewed wildfires."

Nullis said the WMO has now recognized a new record high temperature for the Antarctic continent of 18.3C (64.94F) on Feb. 6, 2020 at the Esperanza station, which Argentina runs.

"Verification of this maximum temperature record is important because it helps us to build up a picture of the weather and climate in one of Earth's final frontiers," said Nullis.

She quoted WMO Secretary-General Petteri Taalas as saying: "Even more so than the Arctic, the Antarctic has few weather and climate observations and forecasts, even though both play an important role in driving climate and ocean patterns and in sea-level rise."

Nullis said the WMO, however, rejected an even higher temperature of 20.75C (69.35F), reported on Feb. 9, 2020, at an automated permafrost monitoring station of Brazil on Seymour Island.

Climate change and temperature rise have spurred a surge in reports of international, hemispheric, and regional weather and climate extremes, especially for heat, Nullis noted.

“We are far off track from reducing global greenhouse gas emissions sufficiently to avert significant impacts of climate and extremes and limit temperature rise to within 1.5C of the pre-industrial reference in line with the Paris Agreement,” says the WMO.