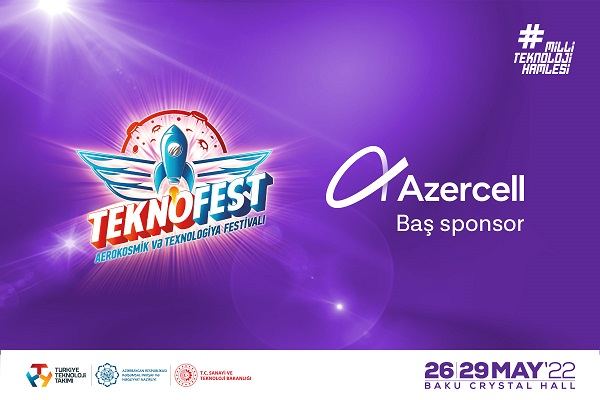 The latest innovative solutions will be demonstrated at the Azercell stand as part of the event, which will be held from 26 to 29 May at Baku Crystal Hall and on the territory of the Baku Seaside Boulevard

Technological competitions in 8 directions will be held within the framework of TEKNOFEST Azerbaijan. The event will also include Smart Karabakh hackathon, “Take Off Baku” Startup Summit and European championship in “Rocket League” cyber sports. “Azercell Telecom” LLC as the main sponsor of this large-scale event, which includes an exhibition of digital products and services, as well as various competitions and entertainment programs in the field of technology, will represent a separate stand there. Constantly bringing advanced technologies to Azerbaijan for 25 years, Azercell will exhibit its products and solutions, fulfilling its strategic goal of "Easing connectivity, empowering lives ". During the festival, visitors of Azercell's stand will have the opportunity to watch interesting services, as well as participate in exciting competitions to win prizes.

In general, the exhibition will feature the services of the festival's partner organizations, including the demonstration of prototypes and STEM projects developed by young tech talents. Also an exhibition of unmanned aerial vehicles and helicopters is planned in the open-air section of the festival.

The festival will be remembered for a spectacular show by the Azerbaijani Air Forces, as well as the famous "Turkish Stars" and "Solo Turk" aerobatics teams. The TEKNOFEST Azerbaijan will also feature a vertical wind tunnel, water attractions, flight simulators, robots and more. Guests of the festival will be able to enjoy the performances of artists and musicians, as well.

Held annually since 2018, the largest aviation, aerospace and tech festival in Turkey is primarily aimed to promote national technologies in this area and reveal the knowledge and skills of teenagers and young people.