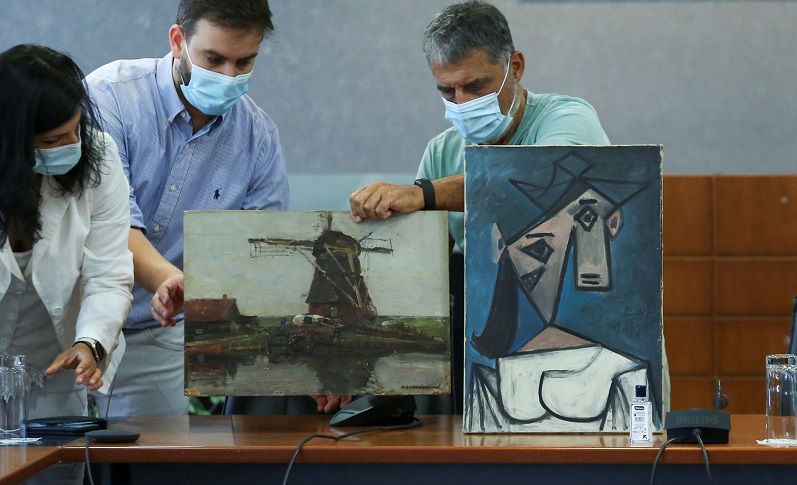 Missing artworks by Pablo Picasso and Piet Mondrian have been recovered by Greek police almost a decade after they were stolen in a daring museum heist.

The two paintings, which had been taken from the National Art Gallery in Athens, were discovered Monday, with one suspect arrested in connection with the theft, a Greek police spokesperson confirmed.

Picasso's "Head of a Woman" and Mondrian's "Landscape with a Mill" were among three artworks grabbed in an early morning raid in 2012. At the time, officers said the intruders had interfered with the alarm system overnight, setting it off repeatedly until it was disabled by museum guards.

The raiders then broke into the gallery's temporary exhibition area via an aluminum-framed door on a balcony. A motion detector was activated during the heist, prompting a guard to give chase, though he was unable to catch the suspect in question.

Depicting a woman in a white blouse against a blue background, the recovered Picasso portrait, "Head of a Woman," had been donated to Greece after World War II in recognition of the country's resistance to Nazi occupation. The reverse is inscribed with a message from the Spanish artist reading: "For the Greek people, a tribute from Picasso."

The second painting, Mondrian's "Landscape with a Mill," is a lesser-known figurative work by an artist renowned for his abstract style. A third item taken in the heist, a pen-and-ink sketch by Renaissance artist Guglielmo Caccia, was not among the recovered items.

The theft took place on the final day of an exhibition entitled "Unknown Treasures," which had also featured prints and etchings by artists including Albrecht Duerer and Rembrandt van Rijn.

Thieves had initially grabbed a fourth work -- "Landscape with a farm," also by Mondrian -- though it was dropped during their getaway.

Citing a police official, who spoke on condition of anonymity, Reuters reported that the two recovered artworks were found hidden at a gorge in the greater Athens area.