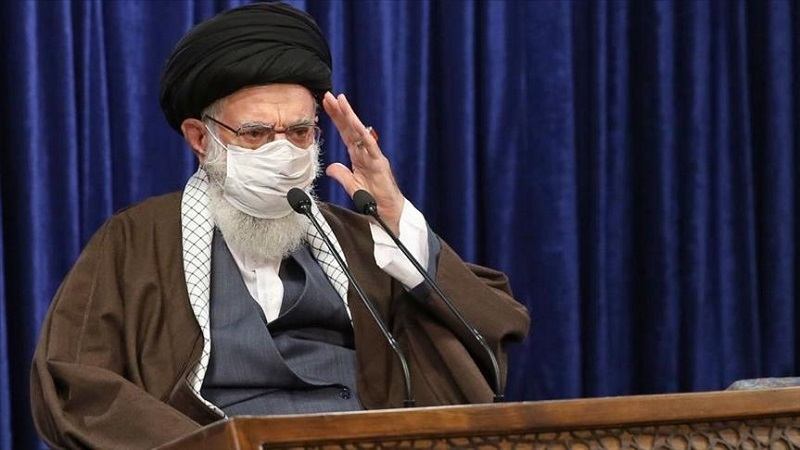 Iran’s supreme leader Ali Khamenei on Friday said the COVID-19 vaccines produced in the US and the UK are banned in Iran, asserting he does not trust their efficacy.

His remarks came during a televised speech on the occasion marking the 42nd anniversary of the uprising against the former ruler of Iran Reza Shah Pahlavi.

Khamenei said he has already communicated his concerns over the entry of US and UK vaccines into Iran to officials, and he is making the public statement now.

He raised questions over the "efficacy" of the Pfizer vaccine produced in the US, saying if the vaccine had been efficient, the daily death toll due to the virus would not have reached the 4,000 mark.

Iran’s leader said he “does not trust” the vaccines from these countries, claiming that they "often want to test these vaccines on people in other countries to check their effectiveness."

He further added that he was “not very optimistic” about the French vaccine either, and prefers domestic production of the vaccine or imports from countries considered reliable.

These remarks come after the government in Iran announced that efforts are underway to import vaccines from abroad after overcoming some of the hurdles created by the US sanctions.

Last month, the governor of Iran’s Central Bank Abdolnaser Hemmati said an initial agreement to transfer money for purchasing vaccines had been made, without specifying the source of the vaccine. He said the bank allocated €200 million ($244.7 million) to purchase the vaccine at this stage.

It was followed by President Hassan Rouhani’s remarks that the country was first looking at domestic production of the vaccine, then on cooperating with other countries to produce the vaccine and finally on purchasing it from the WHO.

Last week, the first phase of the human trials of Iran’s homegrown COVID-19 vaccine commenced with three volunteers, after over 20,000 volunteers had registered for the trial.

The ban on American and British vaccines into Iran comes after reports that it might take months for the mass production of the country’s homegrown vaccine and before it becomes available to people.

Although the new cases and fatalities have seen a significant drop in recent weeks, health authorities have warned against dropping the guard too early.

This week, the country also reported two cases of the new variant of coronavirus, with two Iranians who had recently returned from the UK testing positive.

The decision to prohibit the entry of US and UK vaccines, a health expert said, "can put an added burden on the country’s health professionals involved in domestic production of the vaccine."

“The idea was that until the homegrown vaccine becomes ready for mass usage, Iran can use vaccines imported from abroad,” a health expert who has dealt with COVID-19 patients told Anadolu Agency. “Now they have to work on war-footing.”

Another expert said the vaccines produced abroad should be allowed since the country has already overcome three waves of the virus and the fourth could be looming anytime.

“Although the cases have significantly dropped there is always a looming danger,” said the expert, wishing anonymity. “To pre-empt another wave, the response needs to be quick, and importing vaccines from abroad should be part of the response.”