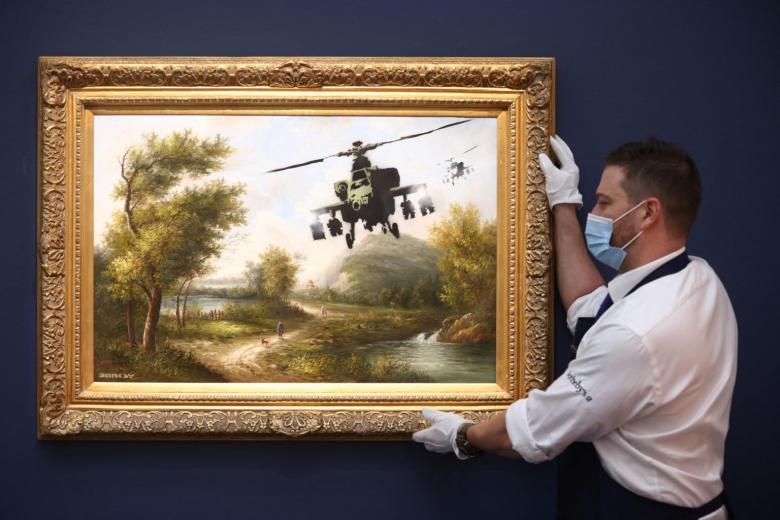 The work – described by auction house Sotheby's as depicting the artist's "anti-war message" – had been expected to go for between 2.5 million pounds and 3.5 million pounds.

The tableau recalls the 1979 film about the Vietnam war, "Apocalypse Now," when the U.S. attack helicopters strafe enemy positions to Richard Wagner's "Ride of the Valkyries."

In its catalog note, Sotheby's said it also reflected Banksy's opposition to the second Iraq war, when he handed out stenciled placards at London protests in 2003.

Another Bansky owned by former Take That singer Williams, "Girl with Balloon," in spraypaint on metal, sold for just over 2.8 million pounds, having been priced at 2 million-3 million pounds.

Williams acquired it directly from the elusive graffiti artist in 2006. The picture is one of his most famous images, showing a young girl holding her hand out towards a red heart-shaped balloon.

Bansky has reproduced the image in a number of different forms.

A partially shredded version – "Love is in the Bin" – sold at Sotheby's in October last year for a staggering 18.58 million pounds in a new record for a British artist.

The artwork had been bought three years earlier for a fraction of the price but soared in value when it was passed through a shredder hidden in its frame.

In March 2021, another Bansky work, "Game Changer," honoring medical staff during the coronavirus pandemic, sold for 14.4 million pounds at Christie's.

The proceeds were donated to the state-run National Health Service (NHS).