President Aliyev: We need to clear and rebuild more than 10,000 square kilometers 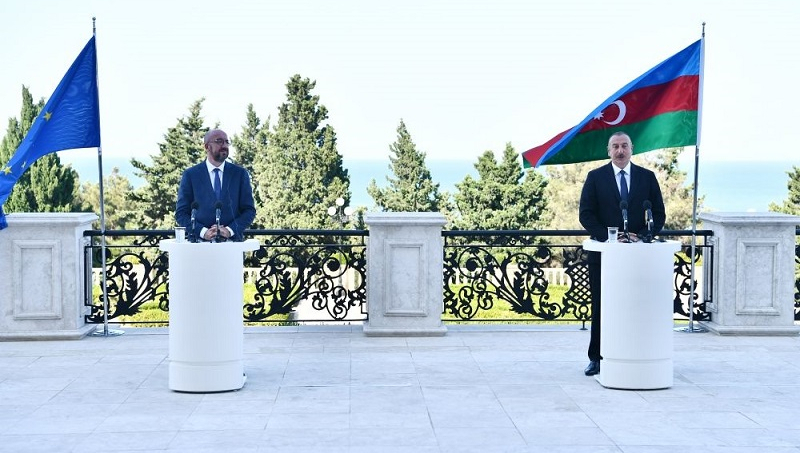 We need to clear and rebuild more than 10,000 square kilometers, Azerbaijani President Ilham Aliyev said during a joint press conference with President of the European Council Charles Michel in Baku on Sunday.

The head of state noted that destruction in the liberated territories of Azerbaijan has been widely covered in the international media.

“International media representatives have also visited the liberated territories several times to witness the scale of destruction. In addition, Ambassadors and heads of other diplomatic missions accredited in Azerbaijan have visited the liberated areas several times. The picture has become clear to them. These territories have been razed to the ground. This destruction was not unleashed during the first Karabakh war, but in post-war years. In the period between the two wars, Armenians deliberately destroyed the historical, cultural and religious heritage of the Azerbaijani people in the occupied territories. A big city such as Aghdam no longer exists today. There is not a single safe building left there. There is no such city as Fuzuli, and when we liberated it, we could not find a single building there to hoist our flag. Jabrayil is completely destroyed. Other cities were used by Armenians for illegal settlement, which is a war crime. Such settlement is a well-known fact and has been confirmed by reliable sources,” he sad.

“Therefore, we have a lot of work to do there. We need to clear and rebuild more than 10,000 square kilometers. Hundreds of thousands of mines have been planted there, and 140 people have been killed or injured by landmines since the end of the war on 10 November, including two of our journalists. While driving, they hit a mine that was planted after the second Karabakh war ended, when the Armenians were given two weeks to evacuate the area,” President Aliyev added.