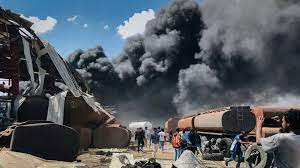 A second day of air strikes against the capital of Ethiopia's northern Tigray region killed 10 people on Wednesday, hospital officials said, while local forces accused troops from neighbouring Eritrea of again joining the war against them, News.az reports citing Reuters.

Ethiopia's government, which has been fighting the Tigray People's Liberation Front (TPLF) since late 2020, did not immediately respond to requests for comment on the airstrikes, fighting, or presence of Eritrean troops.

Among the casualties in Mekelle were a father killed in the second strike and his son, a doctor, wounded when tending victims, said Fasika Amdeslasie, a surgeon at Mekelle's Ayder Referral Hospital.

Some 13 people were wounded.

Five of the victims died en route to the hospital, said Ayder's CEO Kibrom Gebreselassie. Another five died at the scene in an area called Dagim Amsal, he said, citing Mekelle's emergency coordinator.