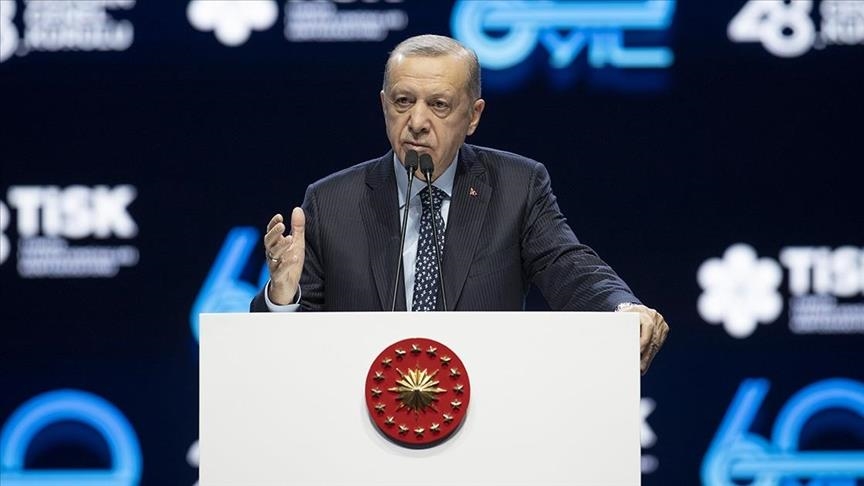 Speaking at the general assembly of the Turkish Confederation of Employer Associations (TISK) in the capital Ankara, Erdogan said: "The West's condition in its fight against terrorism is evident, but Türkiye has overcome all obstacles to fight terrorism."

Türkiye has ended terrorism at its source, he said, and lashed out at those criticizing Ankara's counter-terror efforts in the Ayn al-Arab region.

"Kobani (Ayn al-Arab) is already done (in fighting terror) ... In Idlib, in Kobani, we are taking all the necessary measures, we have taken, and we will take them from now on."

Türkiye demands that the terrorist group exit Manbij, which was occupied by the YPG/PKK in August 2016.

In its more than 35-year terror campaign against Türkiye, the PKK – listed as a terrorist organization by Türkiye, the US, and the EU – has been responsible for the deaths of over 40,000 people, including women, children, and infants. The YPG is the PKK's Syrian offshoot.

"Türkiye is now a place for them (terrorists) to drown in," Erdogan added.

He pledged to increase Türkiye's friends, however, added that "our enemies will know their place. When we face a threat to our survival, we can achieve victories that no one expects."

"A Türkiye that is attempted to be dragged into artificial crises, let alone bowing down, it has been on the rise and this will continue," the president vowed.

Türkiye, he said, now makes its own decisions in politics, economy, diplomacy, and military, and it also creates its own infrastructure and sets its own goals.

"Our destiny is no longer in anyone's hands. Now our nation determines our destiny," Erdogan said.