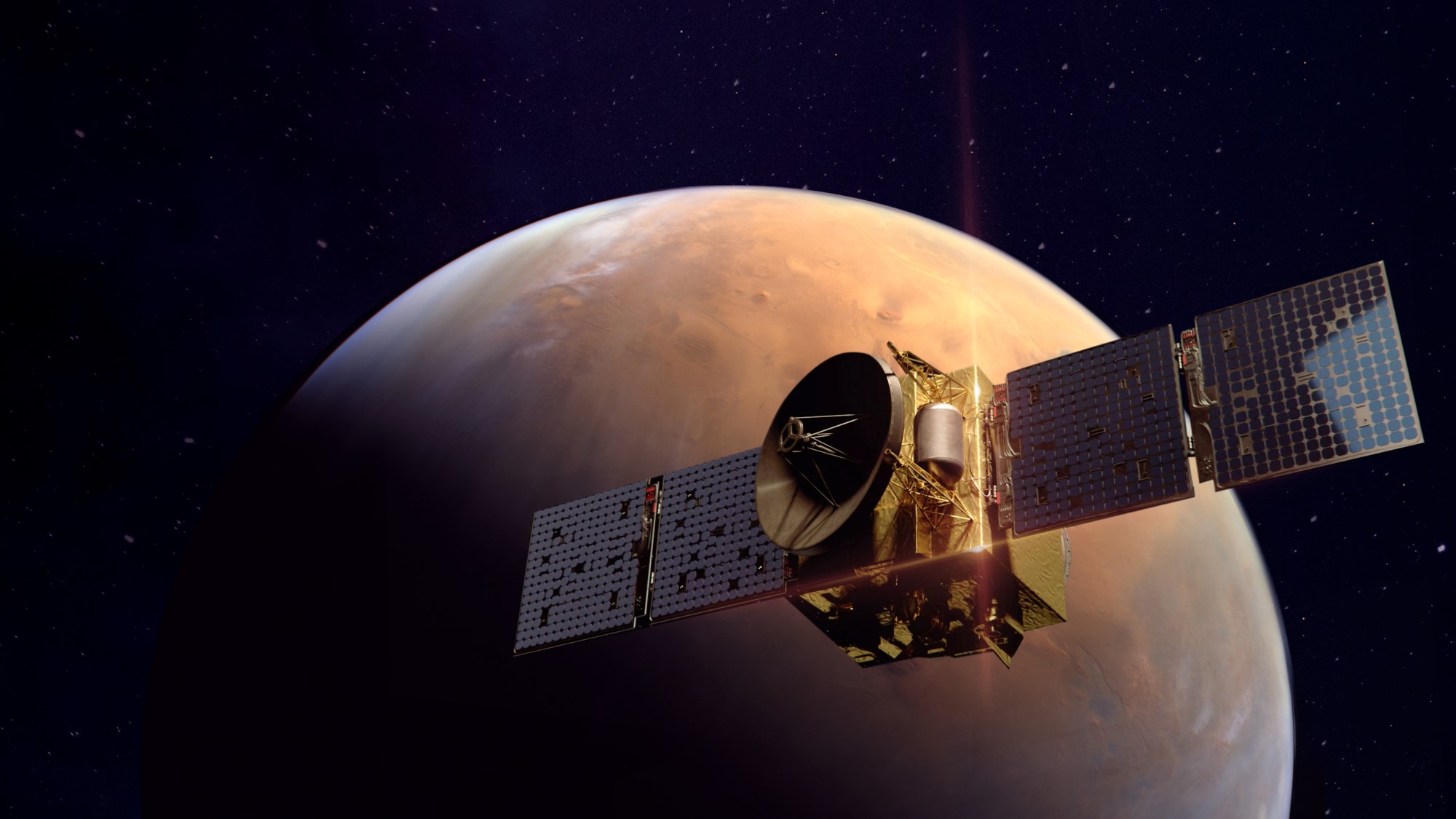 Having arrived in orbit around Mars on Feb. 9, 2021, the United Arab Emirates' Hope spacecraft has been monitoring the Red Planet with, among other tools, its Emirates Mars Ultraviolet Spectrometer (EMUS) instrument. The mission team had hoped to use the instrument to see variability in the composition of the upper atmosphere of Mars, in particular the prevalence of oxygen and carbon monoxide, as well as to spot hydrogen and oxygen escaping into space as the Red Planet's water slowly leaks away.

To support that work, EMUS is designed to detect ultraviolet emission from protons (hydrogen nuclei) in Mars' atmosphere that have been excited by the solar wind, the stream of charged particles that constantly flows off the sun. To scientists' surprise, rather than seeing a uniform glow at these ultraviolet wavelengths, EMUS showed that the emission can often become patchy.

"What we're seeing is essentially a map of where the solar wind is raining down onto the planet," Mike Chaffin, who is a Hope team member from the University of Colorado, Boulder, and lead author of a new paper detailing the findings, said in an emailed statement.

Mars does not have its own global magnetic field like Earth's to shield against the solar wind, but its thin atmosphere still acts as a barrier that can deflect the interplanetary magnetic field carried on the solar wind around the planet. This deflection causes the solar wind to slow and pile up as it drapes over Mars, creating a concentration of charged particles called plasma that can interact with residual magnetic-field lines that remain in regions of Mars' crust.

Scientists already knew that this plasma environment, and its connection to the magnetic fields emanating from the surface of Mars, could influence how, where and when hydrogen and oxygen leak into space. It now seems that it can also influence the location and intensity of the proton auroras, when the magnetic field carried on the solar wind aligns with magnetic-field lines coming from Mars' surface, along which protons are traveling.

The findings came in conjunction with NASA's MAVEN (Mars Atmosphere and Volatile Evolution) mission, which is also in orbit around the Red Planet and is able to observe local plasma conditions in the upper atmosphere. Together, the two missions have provided a comprehensive view of what is occurring.

"Access to MAVEN data has been essential for placing these new observations into a wider context," Hessa Al Matroushi, Hope's lead scientist, said in the statement. "Together, we're pushing the boundaries for our existing knowledge not only of Mars, but of planetary interactions with the solar wind."

Mars' proton auroras were initially detected in 2018 by MAVEN, but the NASA mission only saw them as a uniform glow on the dayside of the planet. The high spatial resolution of EMUS was able to detect patchiness that coincides with turbulent space weather.

For example, in observations gathered on Aug. 11, 2021, "the aurora is so widespread and so disorganized that the plasma environment around Mars must have been truly disturbed," Chaffin said.

The differing extent and location of the patchy proton auroras could indicate different conditions in the plasma environment around Mars, resulting from variations in the solar wind and even the Martian season. Although no new results have been released yet, summer 2022 coincided with summer in the southern hemisphere of Mars, and was expected to produce a large number of proton auroras.

"Our discovery of these patchy proton aurora adds a new kind of event to the long list of those currently studied by EMM and challenges our existing views of how the proton aurora on Mars' dayside are formed," Al Matroushi said.