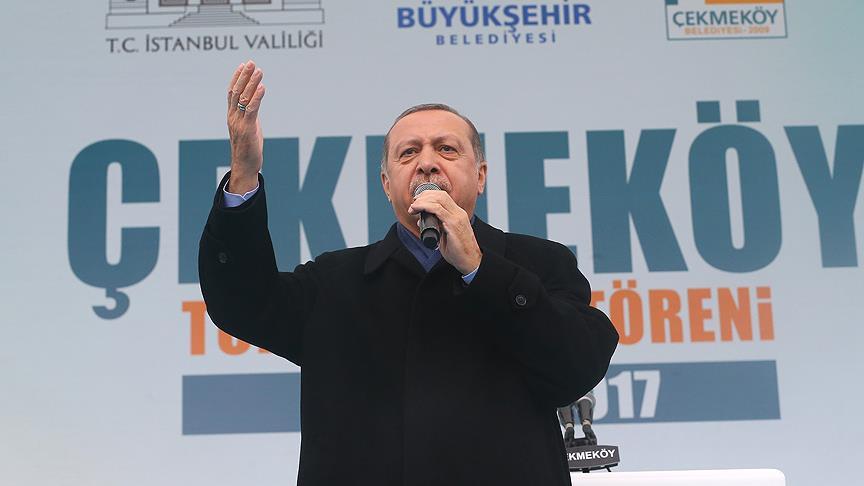 A “local and national presidency” would be within the framework of Turkish Republic's founding principles from 1923, Erdogan said during an engagement in Turkey's Aegean Denizli province.

According to Erdogan, the next presidential election will be in November 2019 if the April 16 referendum on sweeping constitutional changes is passed.

"If my [Justice and Development (AK)] party nominates me as the next president, then we'll proceed together. If they choose someone else, that person will rule the country," Erdogan said.

He accused past coalition governments of fostering instability, saying the reforms offered in the coming referendum aimed to ensure Turkey's political system stays stable and secure.

Reacting to criticism from main opposition Republican People's Party (CHP) leader Kemal Kilicdaroglu, Erdogan said Turkey in the last 15 years under the leadership of the AK Party had developed more than ever without any coalitions.

Erdogan said Turkey's economic growth during periods of single-party rule was approximately six percent, whereas the rate was only four while being administered by coalition governments.

According to Erdogan, if the political instability in Turkey since 1991 had never taken place, Turkey’s per capita income would now have been double its current $11,000.

Erdogan also demanded an explanation for a decision by the European Parliament in Brussels to ban the distribution of English-language Turkish newspaper Daily Sabah from its premises.

The ban came after a complaint by Dutch lawmaker Jeroen Lenaers.

Erdogan said double standards should not be applied against different countries, adding Europe would suffer most from such a loss.

His statement comes after Ankara heavily criticized European states following decisions in Germany, Austria and the Netherlands to ban some campaign rallies ahead of Turkey’s referendum.

President Erdogan compared the bans with Nazi-era practices and also accused European governments of taking sides in Turkey’s referendum by favoring the No campaign.

Turkey, Erdogan said, had been working to build giant infrastructure projects across the country to boost economic growth, including Istanbul’s third airport, which will have a capacity of up to 200 million passengers a year.

According to Erdogan, the airport will have a capacity of 90 million passengers in the first quarter of next year and 150 million by 2023.

In 2015, Turkey closed seven projects totaling a record $44.7 billion, according to the World Bank Group.

A total of four mega projects are currently under construction: Istanbul’s third airport; the Gebze-Halkali commuter train link in Istanbul; the Ovit tunnel in northeastern Anatolia; and the Baku-Tbilisi-Kars Railway.

Last year Turkey opened a third bridge over the Bosphorus Strait (the Yavuz Sultan Bridge, named for a 16th century sultan known for his expansion of the Ottoman Empire), plus the world’s fourth-longest suspension bridge over Izmit Bay (the Osman Gazi Bridge), plus the Eurasia Tunnel, which is an underground road link spanning Istanbul’s European and Asian sides.