For years, northern India - especially the capital New Delhi - has been battling air pollution with levels hitting the hazardous mark during the winter season.

Now, during a nationwide coronavirus lockdown, air pollution in the region has dropped to a 20-year low, according to data published by NASA.

In a series of maps, NASA plotted the aerosol levels in northern India during the same six-day period of March 31 to April 5 from 2016 to 2020.

"We knew we would see changes in atmospheric composition in many places during the lockdown," said Pawan Gupta, a Universities Space Research Association scientist at NASA's Marshall Space Flight Center in Huntsville, Alabama. "But I have never seen aerosol values so low in the Indo-Gangetic Plain at this time of year."

The Indo-Gangetic Plain stretches across the north of India.

The report tracks the aerosol optical depth (AOD), which is the measure of how light is absorbed or reflected by airborne particles as it travels through the atmosphere. 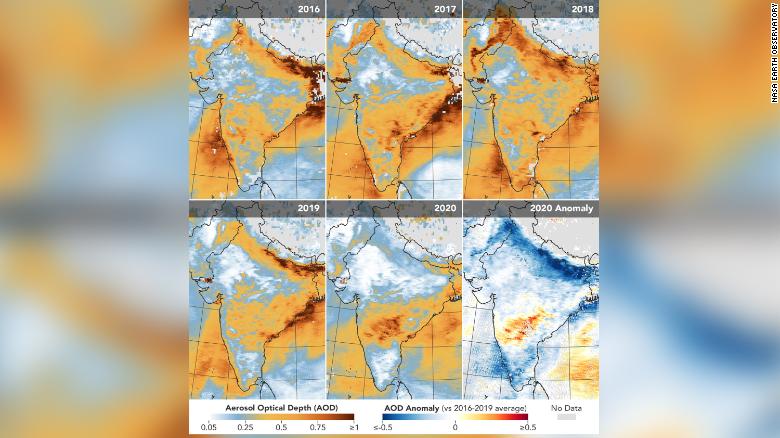 According to the report: "AOD levels in northern India at the beginning of April were significantly below the norm for this time of year and the lowest in 20 years of MODIS observations. Ground observation stations in India have also reported a decrease in particle pollution in the region".

MODIS is an instrument used to monitor large-scale changes, such as what proportion of the earth's surface is covered by clouds each day.

The drop in pollution levels comes as India enters its fifth week of lockdown. On March 25, the Indian government imposed a strict nationwide lockdown halting all construction activities, public transport, and industry.

India isn't the only place to see cleaner air. Lockdowns restricting travel and industry imposed to halt the spread of coronavirus have resulted in unprecedented reductions in deadly air pollution around the world, new analysis shows.