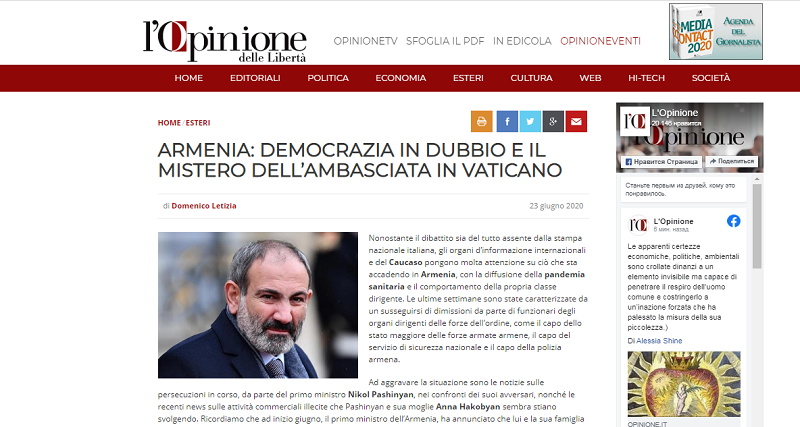 Italian L'Opinione newspaper published an article "Armenia: Doubtful Democracy and the Secrecy of the Armenian Embassy in the Vatican" by journalist Domenico Leticia. The article tells about the current complicated domestic political processes taking place in Armenia, the adoption of controversial changes in the Constitution, the recent resignations of security officials, the persecution of political opponents of the ruling regime, criminal investigations against the second and third Armenian presidents and their families, including the son-in-law of former President Serzh Sargsyan, former Armenian ambassador to the Vatican, the accusation of the opposition against the Prime Minister and his wife for illegal economic activities, and the ineffective activities of the government.

"Despite the complete lack of information in the Italian national press, international and Caucasian media pay close attention to what is happening in Armenia due to the behavior of its ruling class and the difficult situation due to the spread of the pandemic. The past few weeks have been marked by a series of resignations of law enforcement officials, such as the chief of staff of the armed forces, the head of the national security service and the head of the Armenian police.

The situation is aggravated by reports of the ongoing persecution by Prime Minister Nikol Pashinyan of his opponents, as well as recent news about illegal commercial activities that Pashinyan and his wife Anna Hakobyan are carrying out. Recall that in early June, the Prime Minister of Armenia announced that he and his family had revealed positive results of the coronavirus test. The head of the Armenian government said that he was probably infected during the meeting when a person who subsequently had a positive result on the coronavirus poured him a glass of water without wearing gloves. As of June 21, 20,588 cases of coronavirus and 360 deaths were registered in Armenia. The situation is alarming, the worst among the countries of the South Caucasus.

Pashinyan, known in the international press for leading the velvet revolution in the spring of 2018, having managed to overthrow the military regime, has generated in the international community expectations about the country's future under the banner of true democracy. However, after the December 2018 parliamentary elections, one of the first steps taken as the country's prime minister was the beginning of the widespread persecution of his political rivals. On direct instructions from Pashinyan, a criminal case was opened against the second and third presidents of Armenia, respectively, subsequently arrested Robert Kocharian and Serzh Sargsyan. Sargsyan’s relatives also became a target. Hayk Sargsyan, the nephew of the former president, was charged with attempted murder, illegal acquisition and possession of weapons. In addition, a criminal case was opened against another ex-president’s nephew, Narek Sargsyan, as well as against his brother Levon Sargsyan and his son and daughter.

A very specific internal situation has developed, in which the Armenian Embassy in the Vatican is drawn into as an indirect protagonist. Particularly alarming is the criminal investigation into the case of Mikael Minasyan, son-in-law of Sargsyan, the former Armenian ambassador to the Vatican. The ambassador was on the official list of wanted international criminals. His current location is not officially known, but according to unofficial sources of the Armenian community in Italy, the diplomat seems to be hiding in Italy. Minasyan is accused of illegal enrichment, the presentation of false information in the declaration of income and property and the legalization of property obtained by criminal means. Minasyan accused Prime Minister Pashinyan of corruption and betrayal of the interests of the country. According to Minasyan, Prime Minister Pashinyan and his wife Anna Hakobyan are the main actors in illegal international trade related to the disposal of 50 thousand tons of industrial metals. Minasyan also accused Pashinyan of international arms trade and illegal diamond trading. Revenues and funds are taken from the state treasury of Armenia. Recall that from the very beginning of the pandemic, links to illegal international supplies are increasingly mentioned in the news about Armenia and its leadership. According to the Armenian media, in late April, the Russian security service stopped a plane in Krasnodar, on board of which the Armenian authorities delivered 40 tons of cigarettes to the black market. A huge number of illegal cigarettes were also seized in the Voronezh region.

The Armenian opposition parties asked the government to clarify this issue and received in response an intensification of judicial investigations and repressions.

At the request of the Prosecutor General of the country, on June 16, the Armenian parliament cancelled the immunity of Gagik Tsarukyan, the head of the Prosperous Armenia Party and a local businessman, who also accused Pashinyan of providing false information about the real economic, social and medical situation in the country. In addition, Gagik Tsarukyan accused the authorities of improperly organizing the fight against the pandemic. Tsarukyan stated that the composition of the government should be completely changed, as Pashinyan did not implement the promised revolutionary changes. Although MPs representing the opposition parties Prosperous Armenia and Bright Armenia boycotted the decision, the majority vote was enough to confirm that Tsarukyan had been stripped of his immunity. The police forcibly dispersed the demonstration of his supporters, detaining at least 250 demonstrators. As a result of the investigation, Tsarukyan was accused of causing $62 million in damages to the state as a result of illegal commercial activities.

Finally, on 22 June, the Armenian Parliament adopted controversial amendments to the Constitution on the powers of the President and other members of the Constitutional Court. Opposition parties, which boycotted the extraordinary session, claim that the adoption of these amendments implies the overthrow of the constitutional order and usurpation of power by Pashinyan.

After taking power, the Prime Minister tried to neutralize political and public figures, using political persecution as a guise of democracy. Currently, the worst situation with the coronavirus pandemic in the South Caucasus is in Armenia. Armenian opposition parties as well as public organizations call on the government to resign, noting that the measures taken by the government are ineffective and the situation looks completely uncontrollable. The situation should also be of concern to the international community. Numerous groups of activists protesting against "silence" about the arrests of hundreds of people associated with the political opposition and recent accusations of the Armenian ruling class of money laundering and illegal international trade are rallying in front of the US Embassy in Armenia and the EU Delegation. This finally led to the disapproval of European People's Party President Donald Tusk, who expressed concern about the events taking place in this Caucasian country and called on the government of Armenia to stop the unjustified arrests of political opposition members".