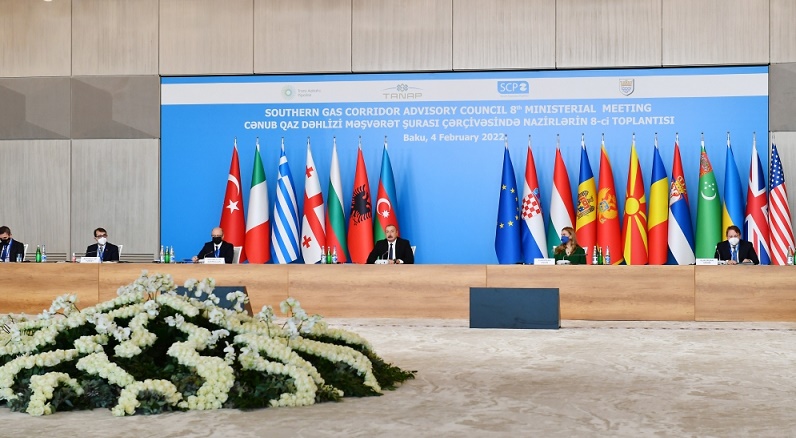 Azerbaijan already for many years proved itself as a reliable source of energy, President of the Republic of Azerbaijan Ilham Aliyev said as he addressed the 8th Ministerial Meeting of the Southern Gas Corridor (SGC) Advisory Council, News.Az reports.

"Our minister of energy together with leading companies, international companies already prepared a conceptual outlook for “green energy” zone in Karabakh and Eastern Zangazur. We already made the international assessment of the potential of renewable sources in Karabakh and Eastern Zangazur and preliminary figures are very promising. It’s about 7,200 megawatt potential in wind energy, and more than 2,000 megawatt potential in solar energy. By the way, I also would like to inform you that our strategic partner in oil and gas - BP shows big interest in working on the liberated territories, particularly, in the district of Jabrayil. We are already in the phase of negotiations with BP on the construction of the renewable source of energy there- more than 200 megawatts," the head of state said.

"I would also like to say that our minister of energy now is in the phase of active negotiations with the leading international energy companies with respect to investment and we are very enthusiastic about that. I think that can be not only part of our internal strategy of green energy development in Azerbaijan, that can create an additional source of export reviews and also will be helpful in both countries which import sources of energy. Also, we have a special program of assessment of the Caspian Sea and initial figures show the technical potential. I’d like to underline the technical potential of the Caspian Sea is more than 150,000 megawatts We have already got certain initial proposals from leading international energy companies with respect to development of this potential. I think it will be very natural, because, first, Azerbaijan already for many years proved itself as a reliable source of energy," Azerbaijani president said.

"As I said, we export all kinds of energy resources. We have diversified electric lines within the country and connecting us with all our neighbors. We have export markets just next door, and growing export markets. For instance, countries like Turkiye with growing economy, with growing population, I think it’s a major market for us. Also is Iran with the same growing population. I know about some plans with respect to building some electric lines under the Black Sea, connecting central Europe with our region and Azerbaijan as a supplier of electric energy with Georgia also can be a part of that. So, really we have a big potential here. We are working very actively. We are doing our homework. At the same time, I am glad that it was agreed between the European Commission and our Ministry of Energy to have a special session devoted to that. Really it is worth praising. In other words, the Southern Gas Corridor is done, but our work continues. We need to continue to work as one team," the head of state said.