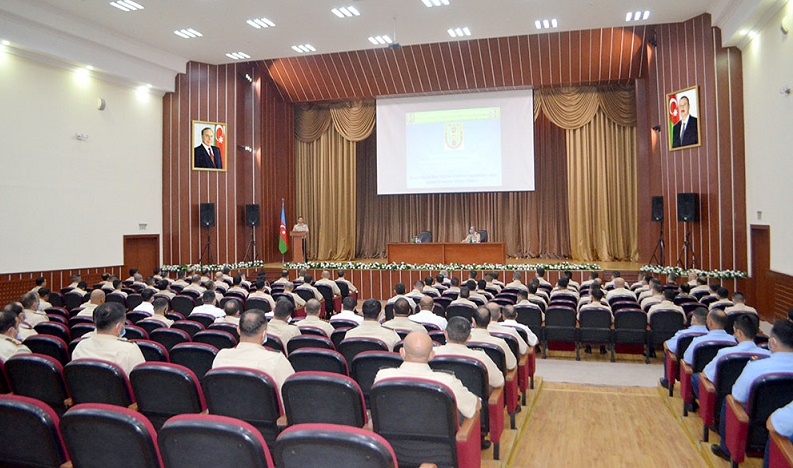 In accordance with the plan for 2021 approved by the Minister of Defense, methodological training sessions were conducted with the staff of the Personnel Bodies of the Army Corps, formations, military units, and special military-educational institutions.

At first, the blessed memory of the national leader of the Azerbaijani people Heydar Aliyev, and heroic sons who became Shehids (Martyrs) for the independence and territorial integrity of Azerbaijan was honored with observing a minute of silence.

During the session Lieutenant General Kerim Veliyev, Deputy Minister of Defense, spoke about the historic victory of the brave Azerbaijan Army under the leadership of President of the Republic of Azerbaijan, Victorious Supreme Commander-in-Chief Mr. Ilham Aliyev, and congratulated the staff of the Personnel Bodies on this victory. Honoring the memory of those who ascended to the heights of Martyrdom in the Patriotic War, the Deputy Minister wished the mercy of Allah Almighty to the souls of Shehids (Martyrs) and healing to the Ghazis and wounded, as well as patience to their families.

Noting that the Personnel Bodies have important responsibilities in accordance with the President's instructions to carry out structural reforms in the Azerbaijani Army and increase its number, Lieutenant General K. Veliyev said that new technologies will be used to conduct personnel reforms more effectively. He noted that new projects that will ensure more flexible and efficient organization of staff placement, rotation, and personnel reforms have been developed. At the end of his speech, the Deputy Minister emphasized that all the work done in this sphere is organized in accordance with the requirements of military legislation.

At the end of the event, the servicemen shared their views on maintaining the high level of combat capability of the Azerbaijan Army.