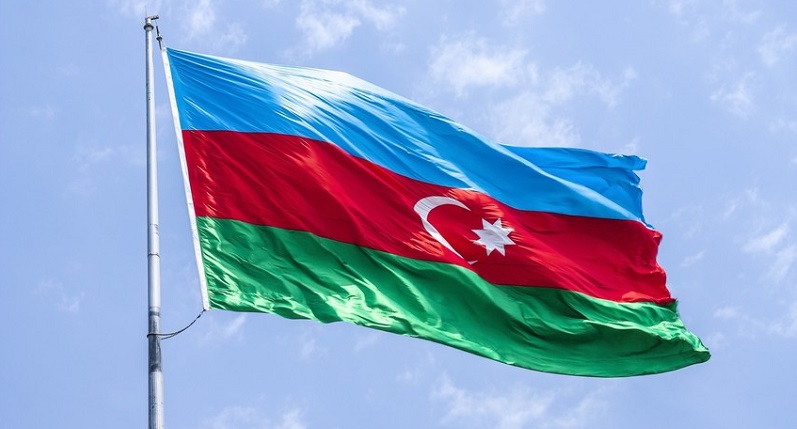 After the Bolshevik occupation on April 27, 1920, the flag of the Azerbaijani Democratic Republic was replaced with the USSR’s red flag with a hammer and sickle.

On November 17, 1990, the flag of the Azerbaijani Democratic Republic was restored under the decision of the Supreme Majlis of the Nakhchivan Autonomous Republic and adopted as the national flag of the autonomous republic.

After gaining independence in 1991, the Supreme Council of the Azerbaijan Republic announced a tricolor flag with a star and a crescent as the national flag of Azerbaijan on February 5, 1991.

The national flag with a 162-meter-high flagpole measures 70 meters high and 35 meters wide and weighs 350 kilograms. The total weight of the construction is 220 tons. The flag's total area is 2,450 square meters with a weight of about 350 kilograms.

The national flag of Azerbaijan consists of three horizontal equal strips. The upper strip is blue in color, the middle-of red, and the lower is green. In the center of the flag, on the red strip, there is an eight-pointed star and crescent; both are white.

The basic description of the flag, along with the ratio, can be found in Article 23 of the Constitution of Azerbaijan that was adopted on November 12, 1995. The state flag of the Azerbaijani Republic consists of three horizontal stripes of the same width. The upper stripe is blue, the middle stripe is red, and the lower one is green; in the middle of the red stripe on both sides of the flag white crescent with an eight-pointed star are depicted. The width of the flag constitutes half of its length.

This year, for the second time, National Flag Day is celebrated in the liberated lands of Azerbaijan. As a result of counter-offensive operations carried out by the Azerbaijani Army since September 27, 2020, our areas, which had been under enemy occupation for many years, were liberated.