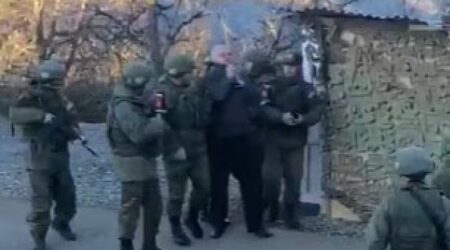 A criminal investigation has been initiated over an attack by an Armenian terrorist on Azerbaijani servicemen, said joint information released by the Prosecutor General's Office and the Interior Ministry of Azerbaijan, News.Az reports.

On November 13, 2021, at 07:12, Armenian citizen Norayr Mirzoyan (born in 1975), moving from the Azerbaijani city of Khankandi along the Khankandi-Lachin highway towards the city of Lachin in a Mercedes-Benz car (with the state registration plate 48-MN-048 ER), who previously acquired an RGD-5 grenade, firearms and explosives in order to commit a terrorist act in the territory of Azerbaijan, got out of the car near the village of Dashalti and threw a grenade towards the servicemen of one of the military units of the Azerbaijani Armed Forces and peacekeeping contingent of the Russian Federation.

As a result of the attack, committed with the aim of premeditated murder on the basis of ethnic hatred, sergeant Hafiz Nasibov and other servicemen (three in total) received bodily injuries of varying severity.

The Prosecutor General’s Office of Azerbaijan opened a criminal case over the incident Articles 29, 120.2.1 (attempted murder committed by a group of persons, by a group of persons by prior conspiracy, an organized group or a criminal community (criminal organization); 29, 120.2.3 (attempted murder of a victim or his relatives in connection with the performance of the official activity by this person or the fulfillment of public duty), 29, 120.2.4 (attempted murder with particular cruelty or in a generally dangerous way), 214.2.3 (with the use of firearms and objects used as weapons), 228.3 (illegal acquisition, transfer, sale, storage, transportation or carrying of firearms, explosives by an organized group) and other articles of the Criminal Code of Azerbaijan.

The necessary investigative measures are being taken.