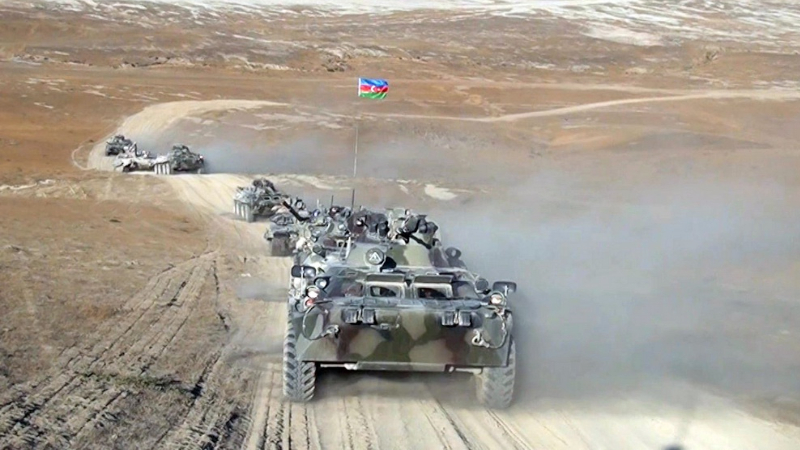 The Jamestown Foundation has published an article titled “Azerbaijan, Turkey hold large-scale military drills amidst escalation of tensions with Armenia”.

News.Az presents the article by Vasif Huseynov, a senior advisor at the Center of Analysis of International Relations in Baku, Azerbaijan.

On July 29, Azerbaijan and Turkey launched a two-week long round of joint military exercises with the participation of ground and air forces from both countries. The military drills involving land forces were held from August 1 to 5, in Baku and Nakhchivan; while the exercises with the participation of military aviation occurred between July 29 and August 10, in Baku, Nakhchivan, Ganja, Kurdamir and Yevlakh (Mod.gov.az, July 27, 30). The goal of these maneuvers was to test the combat readiness of Azerbaijani and Turkish troops to fulfill joint operations, their ability to act quickly in certain situations, to clarify issues of cooperation between the staffs, and to conduct fire management exercises (Azeridefence.com, August 2).

The recently concluded bilateral exercises were held under the legal framework established by the 2010 Agreement on Strategic Partnership and Mutual Support (ASPMS) between Turkey and Azerbaijan. This agreement includes, among others, the casus foederis principle, which obligates both parties, in line with Article 51 of the United Nations Charter, to cooperate when either country faces aggression from a third state or group of states (E-qanun.az, December 21, 2010). In accordance with the ASPMS—which is expected to be renewed for another ten years this month—the two allies have held increasingly more intensive and numerous military drills each year. For instance, up to 13 exercises involving the armed forces of both countries were organized in 2019, while there were only 7 such joint drills in 2018 (see EDM, July 11, 2019).

Compared to previous years, however, the latest joint exercises took place against the background of an exceptional regional situation caused by the sudden flare-up on the border between Armenia and Azerbaijan on July 12 (see EDM, July 14). Moreover, on the heels of the clashes between the two South Caucasus rivals, Russia held its own large-scale snap combat readiness checks of the troops of the Southern and Western military districts on July 17–22. Moscow’s impromptu maneuvers were officially declared to be a “major part of preparations for the Kavkaz 2020 [Caucasus 2020] strategic command and staff exercise,” planned for early fall, and ostensibly to have no connection to the Armenian-Azerbaijani border clashes (TASS, July 18; see EDM, July 23).

The day after Russia’s military drills ended, on July 23, the Armenian Ministry of Defense reported that it was holding military exercises together with Russia involving the commanders of the Russo-Armenian air-defense system, separate anti-aircraft units of the Armenian army as well as air force officers from both countries. According to the ministry, the particular objective of the exercises was to develop new ways of fighting against unmanned aerial vehicles (UAV), which were intensively employed in both the Armenian-Azerbaijani April 2016 “Four-Days War” and the July fighting this year (Asbarez, July 24).

Against this background of strained tensions in the region, on July 16, Azerbaijani deputy minister of defense and the commander of the Air Force, Lieutenant General Ramiz Tahirov, as well as the army commander of the Nakhchivan Autonomous Republic, Kerem Mustafayev, paid a visit to Turkey and met with top Turkish military brass (Defence.az, July 16). Reportedly, the sides discussed the situation between Armenia and Azerbaijan, military cooperation between the two Turkic states, and probably also joint military exercises (Anadoly Agency, Defence.az, July 17). Azerbaijan’s Ministry of Defense stated that the exercises would be held “according to the annual plan” of the ASPMS, but did not explicitly deny its relation with the July 12 border clashes in Tovuz province (Mod.gov.az, July 27).

Turkey appears ready to transfer to Azerbaijan the experience it has accumulated in the use of attack drones, multiple-launch rocket systems (MLRS) and air-defense systems over the last several years. Moreover, Ankara seems determined to broaden the geography of its rise as an influential regional player (Yeni Safak, August 4; Nezavisimaya Gazeta, July 28). Its 13-day military exercises with Azerbaijan, involving military personnel, armored vehicles, artillery mounts, and mortars, as well as military aviation and air-defense equipment, are the largest of its kind in the recent history of military cooperation between the two countries.

The Azerbaijani media reported that up to 11,000 military service members of the Turkish army arrived in Azerbaijan to attend the drills, but there has been no official confirmation about the true size of the Turkish contingent (Modern.az, August 1). Russia’s Nezavisimaya Gazeta reports that no more than a Turkish battalion tactical group of up to 1,000 service members can be concentrated in the garrisons of the Nakhchivan Separate Combined Arms Army. Though, the Russian daily adds that, according to tactical standards, these troops can be reinforced with MLRS and strike aircraft, which are capable of hitting any targets in Armenia (Nezavsimaya Gazeta, July 28).

The Azerbaijani-Turkish drills caused considerable anxiety in Armenia. Meeting with the ambassadors of France and Russia as well as Iran’s newly appointed envoy to Yerevan, Armenia’s Defense Minister David Tonoyan said that his government would be monitoring the scheduled military drills by Turkey and Azerbaijan (Asbarez, July 29). While praising the military partnership between Armenia and Russia and organizing joint military exercises with the Russian army, Tonoyan described Azerbaijan’s military drills with North Atlantic Treaty Organization (NATO) member Turkey as “destabilizing” for the region (Asbarez, July 29).

It is not known yet how the military drills will affect the balance of power in the region, and especially the three-decade-old conflict between Armenia and Azerbaijan that started in the early 1990s. The failure of negotiations brokered by the Organization for Security and Cooperation in Europe’s (OSCE) Minsk Group, co-chaired by Russia, France and the United States, is widely perceived as an important factor in the further intensification of the conflict. And the implications extend far beyond the region since “information warfare” linked to July’s border clashes has already spilled over to the diasporas in third countries (APA, July 21; Lragir.am, July 23; Contact.az, July 31).