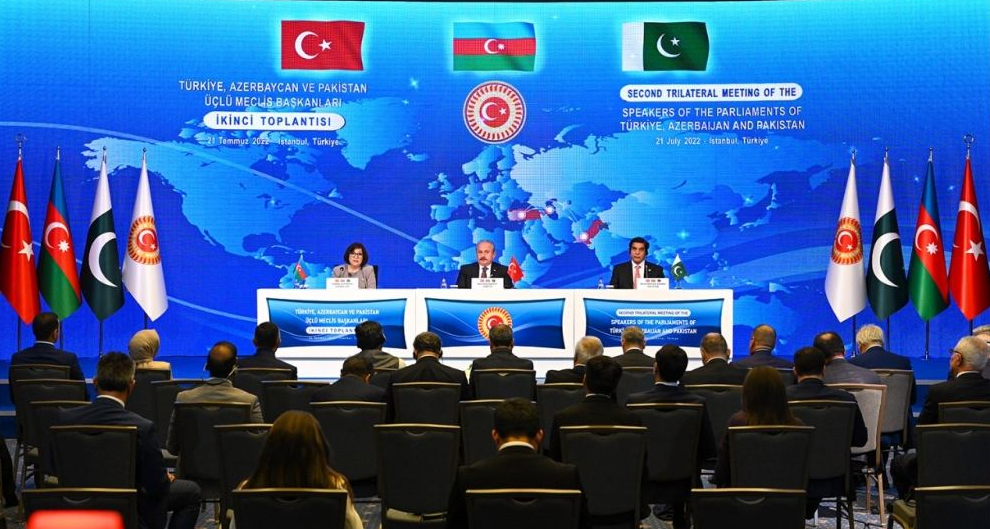 The second Trilateral Meeting of the Chairs of the parliaments of Azerbaijan, Pakistan and Türkiye held in Istanbul was concluded with the signing of the Istanbul Declaration and the joint press statement of the speakers that followed the inking ceremony, News.az reports citing the press service of Milli Majlis.

As she greeted the session participants on behalf of the delegation of the Milli Majlis of the Azerbaijani Republic, Speaker Gafarova voiced the pleasure with another visit to the brotherly Republic of Türkiye. Sahiba Gafarova thanked Chairman of the Grand National Assembly of Turkey Prof. Mustafa Şentop for the invitation to the second Trilateral, for the hospitality and for the high level of arrangement achieved in the second joint meeting of the leaders of the Azerbaijani, Pakistani and Turkish legislatures.

The Chair of the Milli Majlis recalled the recent celebration in the brotherly Türkiye of the 15th of July the Democracy and National Unity Day, saying that the people and state of Azerbaijan had condemned the treacherous coup d’état attempt from the very first minutes and had taken their place right next to Turkey as ever.

The first Trilateral Meeting of the leaders of the Azerbaijani, Pakistani and Turkish parliaments was held upon the instance of the Milli Majlis approximately a year ago. The triple co-operation format created there is of formidable importance. It is because today’s elevated ebb of links between our fraternal countries stands out for the sustained progress of diverse co-operation whereas the parliamentarians as their respective peoples’ deputies are contributing to that progress by having incepted this platform. Besides, the platform highlights the significant role of parliamentary diplomacy as an important means of international co-operation in our time.

It was said next that the joint efforts made in the expired period under the roofs of international parliamentary organisations and our fruitful co-operation, too, proved that the triple platform was very much needful.

Making the format yet stronger had been discussed at the second Trilateral. The parliamentary speakers had also considered ways to transform it to a practical triple inter-parliamentary co-operation platform. They had also contemplated and talked over development prospects.

‘I should like to mention the Istanbul Declaration adopted in the course of the second Trilateral Meeting. It communicates the unity of thoughts and our common stance with regards to many essential issues. The Declaration matters in that it shows the mutual trust and support of the parliaments of our brotherly countries.

‘I am emphatically thankful to the parliaments of the brotherly countries for their support for the restoration and re-construction of the de-occupied lands of the Azerbaijan Republic and for establishing a good neighbourhood based on the principles of sovereignty, territorial integrity and inviolability of borders in the South Caucasus,’ Gafarova said.

The discussions conducted and the decisions passed today are going to make an input of their own in a continued strengthening and broadening of the trilateral co-operation for the benefit of our countries and their peoples, concluded the Speaker of the Milli Majlis.