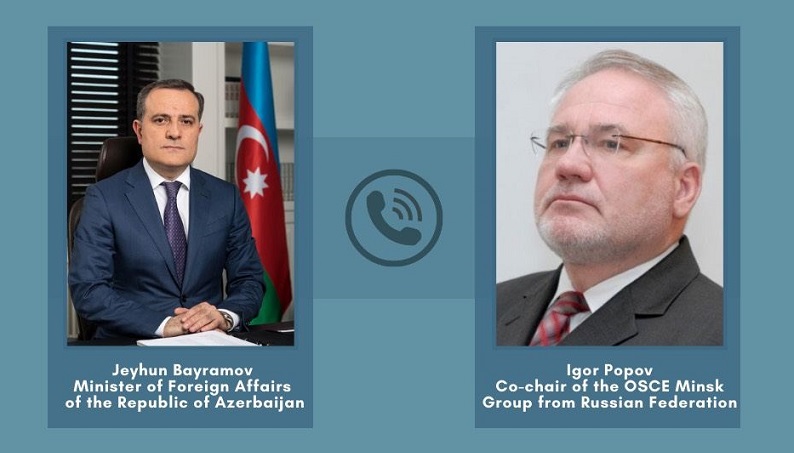 On October 11, 2020, on the initiative of the Azerbaijani side, a telephone conversation took place between Minister Jeyhun Bayramov and OSCE Minsk Group co-chair of Russia Igor Popov.

Minister Jeyhun Bayramov informed the other side that Armenia continues to deliberately fire on Azerbaijani civilians and civilian objects even after the humanitarian ceasefire was established. Minister drew the attention of his interlocutor to the attempted attack of the Armenian armed forces in the direction of Hadrut and Jabrayil a few hours after the establishment of the humanitarian ceasefire, the shooting by the Armenian armed forces of a sanitary medical vehicle, clearly marked with a white flag, collecting the bodies of Armenian soldiers and shelling of Ganja, the second-largest city in Azerbaijan and far beyond the frontline, with rocket fire by the Armenian armed forces.

Minister noted that the full responsibility for the situation in the region lies with the Armenian political and military leadership.

Russia's co-chair of the OSCE Minsk Group Igor Popov expressed regret over the situation and stressed the importance of ensuring the ceasefire.

The Russian co-chair of the OSCE Minsk Group, Igor Popov, expressed his concerns over the situation and stressed the importance of compliance with the terms of the Moscow agreement.