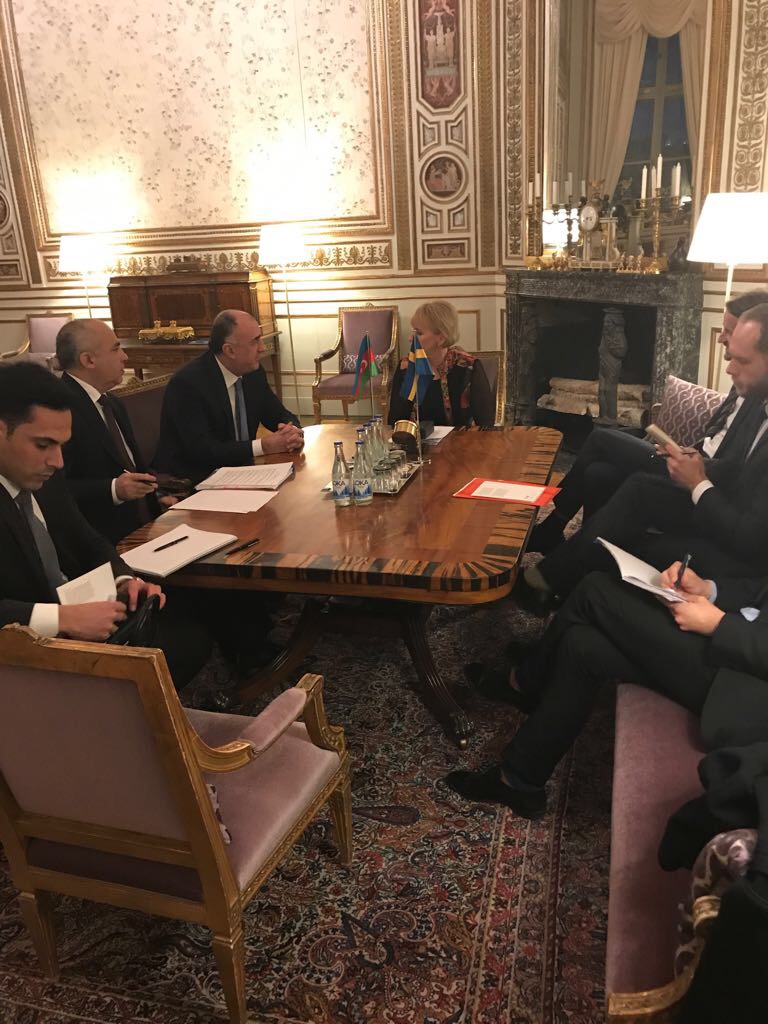 Foreign Minister Elmar Mammadyarov met with Margot Wallström, Minister of Foreign Affairs of Kingdom of Sweden within his official visit.

At the meeting, the ministers reviewed the current status of relations, issues on the agenda between the two countries and stressed the importance of high level mutual visits with a view of expanding cooperation. Celebration of 25th anniversary of the establishment of diplomatic relations in 2017 between Azerbaijan and Sweden was noted with satisfaction.

The sides reviewed the ways of further development of economic relations between the two countries and in this regards, activity of Swedish companies in Azerbaijan was commended, as well as importance of increasing mutual investment was mentioned. During the meeting, Ministers said that there is broad potential for strengthening of economic-trade relations and increasing of trade turnover between Azerbaijan and Sweden.

They also exchanged their views on the current level of negotiations process on Strategic Partnership Agreement between Azerbaijan and European Union and expressed their belief that this agreement will contribute to the development of comprehensive cooperation between Azerbaijan and the EU.  Ministers touched upon the upcoming Brussels Summit of Eastern Partnership countries and discussed the issues on agenda.

Elmar Mammadyarov  mentioned that Azerbaijan stands for the development of cooperation with EU member states based on mutual respect and understanding. Adding that our country already signed strategic partnership agreements with around 10 EU member states .

Elmar Mammadyarov  informed about the projects realized with Azerbaijan’s initiative and participation including North-South and East-West corridors and in this regards noted that Sweden can also get benefited from North-South railways linking South Asia and Northern Europe.

Touching upon upon the latest negotiations process with the mediation of the OSCE Minsk Group co-chairs on the settlement of the Armenia-Azerbaijan Nagorno-Karabakh conflict,  Elmar Mammadyarov stated that the attempts to change the internationally recognized borders of states by use of force is  unacceptable. Elmar Mammadyarov added that Sweden is one of OSCE Minsk Group countries and contribution of all Minsk Group countries is important for the conflict resolution on the basis of relevant UN Security Council resolutions and the Helsinki Final Act with a view of providing withdrawal of armed forces of Armenia from the occupied territories of Azerbaijan. He emphasized the importance of exhibiting  non-selective and same approach by EU guided by the principles of territorial integrity, sovereignty, and inviolability of borders in regards with all protracted conflicts, as endorsed by the EU Global Strategy.

During the meeting, the sides also exchanged views on the cooperation within the international organizations and regional issues of mutual interest.