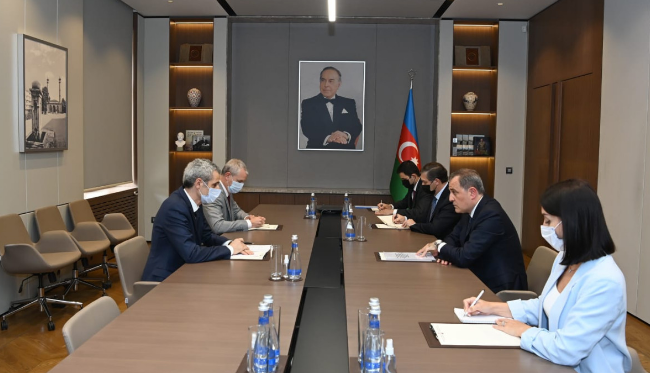 On September 5, 2022, the Minister of Foreign Affairs of Azerbaijan Jeyhun Bayramov received the French Republic's Extraordinary and Plenipotentiary Ambassador to the Republic of Azerbaijan Zacharie Gross, on the occasion of the end of his diplomatic tenure in our country, the press service of MFA told News.az.

Minister Jeyhun Bayramov, referring to the fact that the French ambassador operated in a very historic period for Azerbaijan, noted the efforts of Ambassador Zacharie Gross towards the development of bilateral relations and his professional approach.

It was emphasized that the continuity of the political dialogue between the two countries, especially the close contact between the state leaders, significantly contribute to the development of relations, including the positive resolution of any issues. The minister emphasized that the development of cooperation, especially in humanitarian and educational fields, continues.

Ambassador Zacharie Gross noted his activity in Azerbaijan with satisfaction. The ambassador emphasized the importance of cooperation between the two countries in economic, transport-connection, humanitarian and other fields and noted that there are opportunities to advance the bilateral agenda in many fields.

The minister noted with satisfaction the support of the French side in the field of demining. He pointed out that it is necessary to clear the territories from mines in terms of the reconstruction of the liberated territories and the acceleration of the return of the former internally displaced persons to their homes.

During the meeting, the parties discussed issues on the bilateral agenda, regional peace-building efforts and other issues of mutual interest.