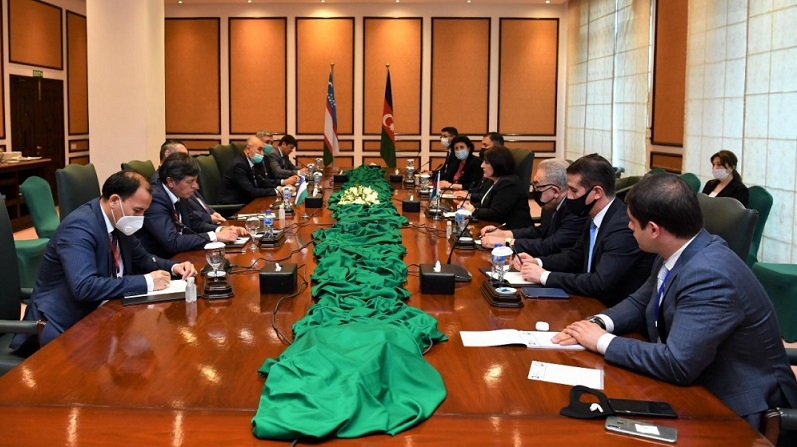 On June 1, Speaker of the Azerbaijani Milli Majlis Sahiba Gafarova met with the delegation led by Chairman of the Legislative Chamber of Oliy Majlis of the Republic of Uzbekistan Nurdinjon Ismoilov who also attended the current event of the Economic Co-operation Organisation’s Parliamentary Assembly (PAECO) in Islamabad.

Speaker Sahiba Gafarova said that Azerbaijan and Uzbekistan, close and friendly to each other, also had the religious and cultural affinity being a source of added opportunities to further deepen the mutual relations. “The relations set new standards qualitatively with the two countries having gained independence; reciprocal visits and conversations of the state leaders had played a significant role in reaching such a level. The high-level political dialogue is bearing well in other areas too,” Gafarova mentioned.

Speaker Sahiba Gafarova also highlighted the success of Azerbaijan in the 44-day Patriotic War when the country enforced the UN Security Council resolutions all by itself. “The victorious Azerbaijani Army delivered the formerly-occupied territories from the Armenian invaders under the supreme command of President Ilham Aliyev. As for now, a period of restoration and construction reigns in those lands. Armenia cannot seem to be able to reconcile itself with this reality; it refuses to divulge minefield maps and resorts to provocations as far as border delimitation is concerned. But Azerbaijan is moving to its own goals with assurance that notwithstanding,” Sahiba Gafarova said.

Speaker of the Legislative Chamber of Oliy Majlis of the Republic of Uzbekistan Nurdinjon Ismoilov said that Uzbekistan appreciated very much the merits of Azerbaijan’s national leader Heydar Aliyev in the furtherance of the bilateral ties.

The Uzbek public are well aware of the achievements that Azerbaijan made under the guidance of President Ilham Aliyev and follow the developments in the relevant part of the Caucasus closely.

Speaker Nurdinjon Ismoilov pointed out the progressing political, economic and humanitarian ties between the two countries, hailing the work done by the friendship groups in both parliaments. He said MPs’ reciprocal visits were very important and useful in terms of discussing such topics.

During the conversation, the sides also discussed development prospects of the interparliamentary ties and other issues.