Ceremony devoted to anniversary of April battles held in Baku 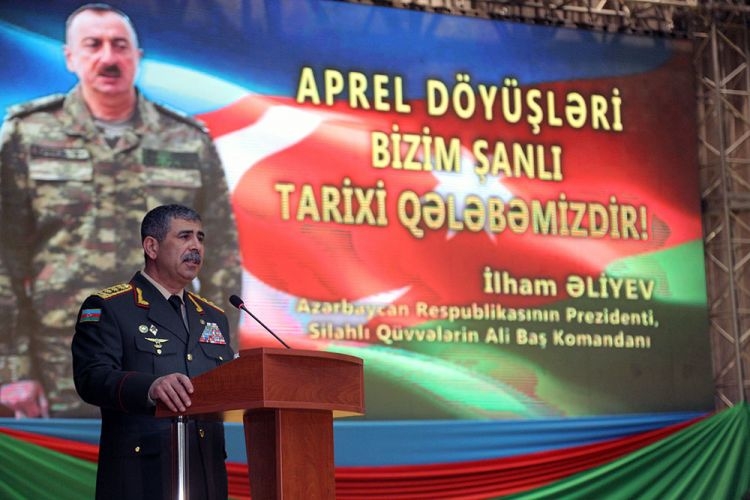 A ceremony under the motto of “April battles are our glorious victory” devoted to April victories of Azerbaijani Army was held, APA reports.

According to Ministry of Defense, firstly memory Heydar Aliyev and martyrs perished heroically while fulfilling the service duties for the sovereignty and territorial integrity of our country was remembered with a one minute silence, the state anthem was sounded.

Giving a speech Minister of Defense, Colonel-General Zakir Hasanov said that the enemy has not recovered itself yet after Azerbaijani Army’s strikes. He noted that as a result of special care and attention of Azerbaijani president, complex reform was conducted in Azerbaijani army and new and modern combat vehicles have been included in armament. Practical steps have been taken to increase the professionalism of personnel, relevant measures have been taken to improve the servicemen’s social condition. Hasanov stressed that Azerbaijani army is ready and able to fulfill ant task given by the head of state to liberate our lands.

Azerbaijani President`s Assistant for Public and Political Affairs Ali Hasanov said that April battles drew international attention to the conflict. He stressed that the incident demonstrated that Azerbaijani soldier has higher fighting and moral and psychological readiness, will of victory. These battles showed power of state and army, unity, solidarity, patriotism of the people. It also proved that Azerbaijan will never accept the occupation of its lands and is ready to restore territorial integrity at all costs.

Azerbaijan’s National Hero Murad Mirzeyev’s father Telman Mirzeyev said that Azerbaijani army showed its power to not only enemy, but also to the world.

Thereafter, servicemen distinguished in the battlers were awarded with medals and certificates of honour. Heads of Executive Power of Agjabadi, Aghdam, Barda, Fuzuli, Shamkir, Tartar and Khojavend districts were conferred special awards of the Ministry of Defense for their support to Armed Forces.