Children – victims of not only war, but also double standards – ANALYTICS 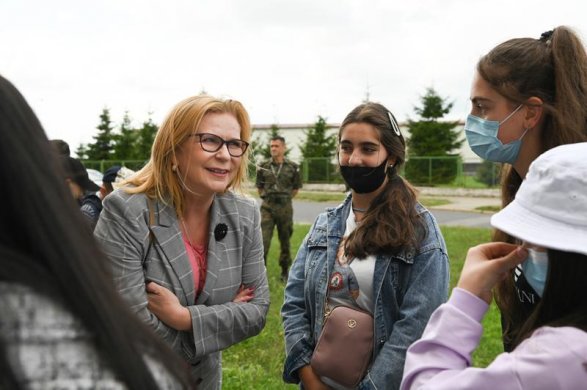 As is known, war is a tragedy for every family, regardless of which side they are on. It is doubly tragic for the children who lost their fathers. In this sense, it is necessary to do everything possible to somehow ease this burden and trauma for them. The Second Karabakh War (from late September to early November 2020), as a result of which Azerbaijan liberated its territories from the Armenian occupation, is a vivid example of this.

After the end of the war, both countries launched rehabilitation programs for the “children of war”. In Azerbaijan, these children are treated as children of martyrs, whose fathers sacrificed their lives for the territorial integrity of the country.  Some countries also began to pay considerable attention to this issue.

However, the policy of undisguised double standards manifested itself even on such an “inviolable” issue as the feelings of innocent war-traumatized children.

So, just a few days ago it became known that Malgorzata Gosiewska, Vice-Speaker of the Polish Sejm, invited and met in Warsaw with a group of Armenian children, whose families were affected by last year’s armed conflict. The children flew to Warsaw from Yerevan on a special military plane provided by Poland’s Defense Minister Mariusz Blaschak.

At first glance, the Polish politician’s move seems worthy of respect, because these are children who lost their fathers during the hostilities. The question arises, why is there not a single Azerbaijani child among the invited children? But Poland is one of the active advocates of the values of equality and justice, for which the Eurozone is fighting so zealously…

It is hard to believe that Poland has forgotten about the fact of the Khojaly genocide perpetrated by Armenian militants during the first Karabakh war against Azerbaijanis. As many as 63 children were killed, and hundreds were left without their parents as a result of the genocide. On 4 July 2015, Azerbaijani woman Sahiba Allahverdiyeva, 51, and her two-year-old granddaughter Zahra Guliyeva were killed as the Armenian armed forces shelled the village of Alkhanli, Azerbaijan’s Fuzuli district. Furthermore, the overnight bombardments by Armenia of Ganja and other cities of Azerbaijan during the second Karabakh war claimed the lives of dozens of children. But, as it turned out, for the Polish authorities, these are just a combination of two words “Azerbaijani children”, nothing more.

Is it possible that when it comes to the victims of the war, Poland, an EU country, introduces a “dress code” by nationality and religion? Are these factors currently measuring justice in modern European diplomacy?

All this allows saying that Poland decided to politicize this issue as much as possible. Why is Poland turning a blind eye to the fact that Armenia is the culprit of these troubles of children from both sides, Azerbaijani families and children had been suffering from the Armenian aggression and occupation for three decades, Azerbaijani children have been left not only without their fathers, but homes, and spent their childhood in refugee camps?  It is unlikely that an example will be recalled of how any European country would organize such a trip for children of the war from Azerbaijan. Isn't this sheer cynicism?

In connection with this issue, News.Az sent requests for comments to the Polish Embassy in Azerbaijan, as well as the Sejm, the Ministry of Foreign Affairs, and the Ministry of Defense of Poland.

We are sure that readers, as well as us, are very interested in seeing the answer that will come from Warsaw. If at all it is possible to somehow intelligibly answer such blatant cynicism and justify it.