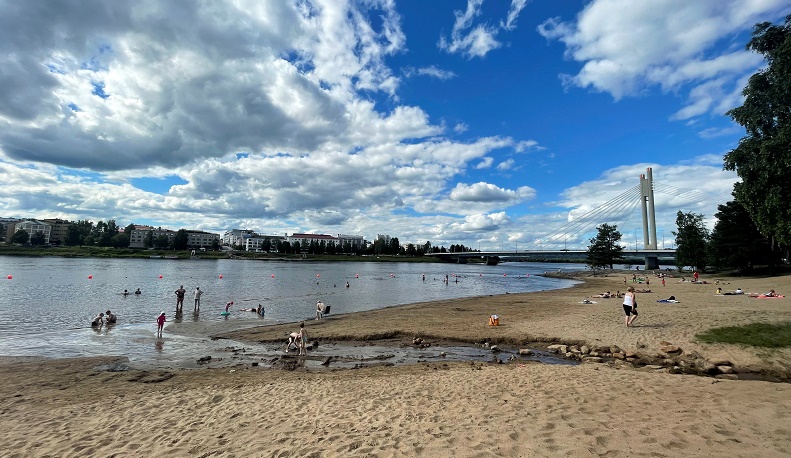 A stifling and persistent heatwave is sending Finns flocking to beaches and emptying stores of air conditioners, replicating extreme climatic conditions at similar latitudes across the Atlantic, where record temperatures have killed hundreds.

On Monday, a northern Finnish weather station recorded 33.5 degrees Celsius, the second-highest ever in Lapland, and the average June temperature in Helsinki was the hottest since records began in 1844, according to the Finnish meteorological institute.

“This is the result of a lengthy and resilient high-pressure area that has gotten stuck,” Mika Rantanen, an extreme weather researcher at the institute, told Reuters of a phenomenon that has also spread across the Baltic states and Russia’s St Petersburg region.

Teenage climate activist Greta Thunberg has been drawing attention to likewise surging temperatures in northern Scandanavia above the Arctic Circle, where she has been camping and hiking among melting snowfields.

“34.3 (degrees Celsius) was recorded in Banak, Norway, the highest temperature ever measured above 70N (degrees North) in Europe.” she posted on Instagram.

The Finnish heatwave and the far stronger one that has killed hundreds of people in the United States and Canada are on the top curves of the same northern hemisphere jet stream, Rantanen said.

“Finland and Canada are located on the top ... and then towards the bottom, the weather is colder in places such as Britain, Iceland, and Greenland,” he said.

Even though heatwaves are normal in the North, this one is exceptionally hot, and the one in Finland also seems to be exceptionally persistent, Rantanen said.

“These kinds of blocking high pressures usually last for a week or two, but for this one, it is difficult to say when it will move as it just shifts a bit and keeps regenerating itself,” he said.