India to launch a record 103 satellites next month 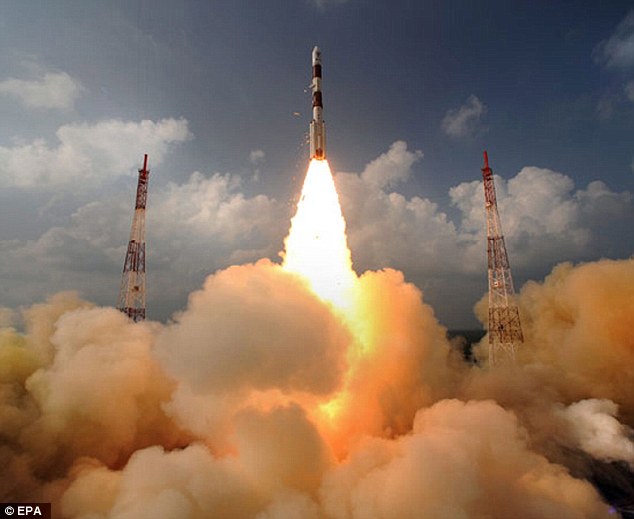 India is set to launch a rocket carrying 103 satellites next month in a record single mission.

The country's famously frugal space agency is seeking to zoom ahead in the commercial space race, according to reports.

The rocket will blast off from the southern spaceport of Sriharikota carrying three Indian satellites and 100 from countries including from the US, France and Germany, the Press Trust of India said, according to Daily Mail.

If it succeeds, India will set a world record as the first country to launch the most satellites in one go and leave behind Russia, which launched 39 satellites in a single mission in June 2014.

'We are making a century by launching over 100 satellites at one go,' S. Somnath, a director at the Indian Space Research Organisation (ISRO), was quoted as saying at a science convention in the southern state of Andhra Pradesh.
Another official told AFP that most of the 100 foreign satellites were meant for commercial purposes, while the Indian satellites were intended to observe and measure the Earth's atmosphere.

The business of putting commercial satellites into space for a fee is growing as phone, internet and other companies as well as countries seek greater and more high-tech communications.

India is competing with other international players for a greater share of that launch market, and is known for its low-cost space programme.

Last June, India set a national record after it successfully launched a rocket carrying 20 satellites, including 13 from the US.

In May, it successfully launched its first mini space shuttle as it joined the global race to make reusable rockets.

It sent an unmanned rocket to orbit Mars in 2013 at a cost of just $73 million, compared with NASA's Maven Mars mission which had a $671 million price tag.

ISRO is also mulling the idea of missions to Jupiter and Venus, according to PTI.

'We are looking at other planets that we can explore... two of them are Jupiter and Venus,' M. Nageswara Rao, an associate director at ISRO, said Wednesday, adding 'it may take few years from now'.