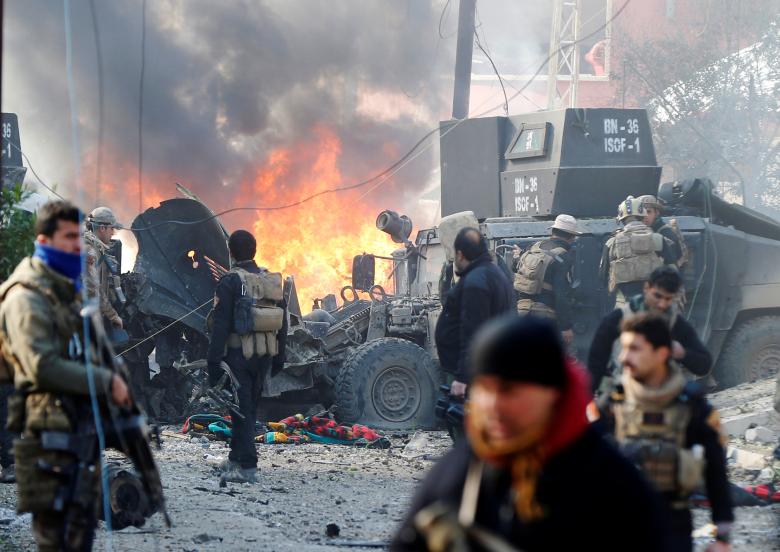 Iraqi special forces pushed into a pocket of Islamic State-held territory in eastern Mosul on Tuesday, the military said, seeking to recapture the remaining districts under the group's control east of the Tigris river.

The militants have been driven out of most eastern districts in their Iraqi stronghold in a 3-month-old U.S.-backed campaign. Iraqi troops have seized large areas along the river, which bisects Mosul from north to south, according to Reuters.

Capture of the entire east bank, which military officials say is imminent, will allow the army, special forces and elite police units to begin attacks on the city's west, still fully held by Islamic State.

A military statement said Iraqi Counter-Terrorism Service (CTS) forces had pushed into the Eastern Nineveh and Souq al-Ghanam districts, which are flanked by areas held by Iraqi troops.

A second statement said the CTS had also seized al-Muhandiseen district, nearly 3 miles further northwest, which lies a short distance from the river.

CTS spokesman Sabah al-Numan told state television that more than 60 neighborhoods in eastern Mosul - out of a total of around 80 - had been recaptured since the start of the offensive in October.

Advances have gathered pace in the new year thanks to improved battle tactics and better coordination between different military branches, U.S. and Iraqi military officials say.

Further south, elite rapid response units of the Iraqi federal police have secured much of the eastern bank of the Tigris.

A spokesman for the rapid response forces, Lieutenant-Colonel Abdel Amir al-Mohammedawi, said some Islamic State fighters had fled by boat across the river during the military's recent advances, taking civilians as human shields so forces could not fire at them.

"They fled the eastern bank for the west, and took women and children," he told Reuters.

Islamic State has fought from among crowded residential areas and Reuters witnesses have seen its fighters shoot at civilians in areas they have been driven out of, in apparent efforts to slow the advance of Iraqi forces.

Several thousand civilians have been killed or wounded in fighting since October.

Advances slowed towards the end of last year as the military sought to avoid hitting civilians, Iraqi military officials say.