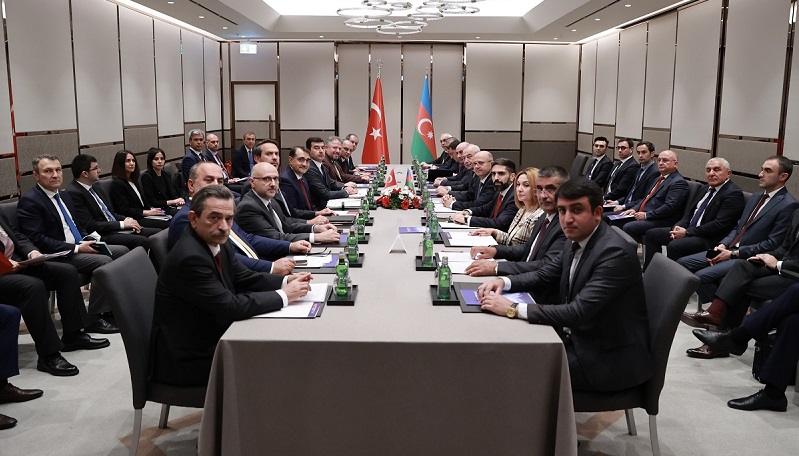 The 2nd Azerbaijan-Türkiye Energy Forum was held in Istanbul on Thursday, the Azerbaijani Ministry of Energy told News.Az.

The forum was co-chaired by Energy Minister of Azerbaijan Parviz Shahbazov and the Minister of Energy and Natural Resources of Türkiye Fatih Donmez.

The forum was preceded by a bilateral meeting between the energy ministers of both countries. The meeting reviewed the activities of working groups on cooperation priorities in the format of the Energy Forum. Discussions were held on the results of the meetings of 4 working groups on hydrocarbon, renewable energy, energy efficiency, electricity market and regulatory issues on 5 October. The strengthening of partnerships related to the supply and transit of natural gas and electricity was also discussed.

In his speech at the meeting, Minister Shahbazov emphasized that the forum serves to strengthen energy cooperation in Azerbaijan-Türkiye allied relations and develop it in line with global challenges. The minister said that the strong Azerbaijan-Türkiye energy union is a historical necessity and a guarantor of safe and sustainable energy supply on a regional and European scale.

“Such an ever-increasing geostrategic role of Azerbaijan and Türkiye in the realities of a complex geopolitical and energy crisis is the embodiment of the policy pursued by President Ilham Aliyev and President Recep Tayyip Erdogan with unshakable trust and confidence in each other, as well as the united power of Azerbaijan and Türkiye in their example,” Shahbazov added.

The importance of TANAP for Türkiye, which will increase with the expansion of the corridor, was also mentioned. It was noted that from July 2018 to October this year, TANAP supplied 18 bcm of natural gas to Türkiye, and 4.2 bcm out of 6.1 bcm of gas supplied to this country was transported via this pipeline during 9 months of 2022. It was noted that gas exports from Azerbaijan to Türkiye will reach to 9.3 bcm by 2023. The Minister also said that electricity from Azerbaijan can be exported to Türkiye and transmitted to Europe through the Zangazur corridor. Thus, Azerbaijan and Türkiye will further strengthen their positions in ensuring energy security in the field of electricity, following oil and natural gas.

Minister Donmez said Türkiye will always continue to be with Azerbaijan in the implementation of the green energy concept in the territories liberated from occupation as a result of the Patriotic War.

“In the near future, we plan to sign an intergovernmental agreement that will further promote cooperation in our energy sector,” he added.

President of SOCAR Rovshan Najaf, Deputy Vice President of Azerenergy OJSC Vugar Shahmuradov, Chairman of the Board of Small and Medium Business Development Agency of Azerbaijan (KOBIA) Orkhan Mammadov, Department Director of Export Promotion of the Azerbaijan Export and Investment Promotion Foundation (AZPROMO) Tural Hajili, BOTAŞ General Manager Burhan Ozcan, Director General of the Turkish Petroleum Corporation (TPAO) Melih Han Bilgin, Chairman of the Board of TEİAŞ Orhan Kaldirim, General Manager of the Electricity Generation Corporation (EÜAŞ) Izzet Alagoz, the President of the Foreign Economic Relations Board (DEİK) of Türkiye Nail Olpak and representatives from other organizations made speeches at the forum.

At the end of the event, the Protocol of the 2nd Azerbaijan-Türkiye Energy Forum was signed.