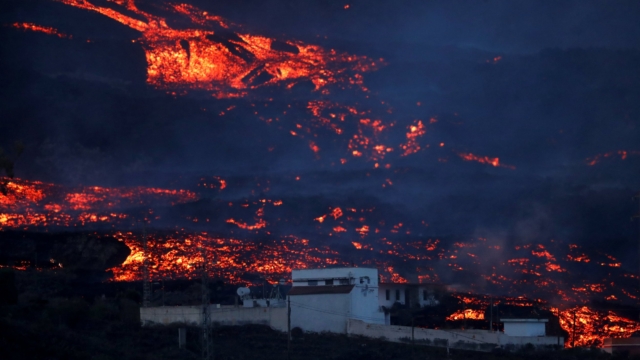 Spain's island of La Palma has been rocked by the strongest earthquake since the start of the eruption of the Cumbre Vieja volcano in September, Xinhua reports.

The quake measuring 5.1 on the Richter scale happened at 7:24 am local time on Saturday, and was felt all over La Palma, as well on La Gomera -- its neighbor in the Canary Island chain in the Atlantic Ocean.

The Spanish Geographic Institute (IGN) registered 42 quakes during Friday night and Saturday morning, with 12 of them measuring above 3 points on the Richter scale.

Lava flows have covered 941 hectares of land (including much agricultural land) and destroyed over 2,100 buildings, according to information from the Copernicus satellite. Over 7,000 people have been evacuated from their homes.

Spanish TV reported that the eruption has turned the island into a tourist attraction, with 90 percent occupancy of hotels on La Palma this weekend (a holiday weekend in Spain). An estimated 10,000 tourists are expected to visit the island over the next three days.

Local authorities have set up a shuttle bus service for tourists wanting to visit the volcano, in order to limit traffic so that the emergency services can work undisturbed.